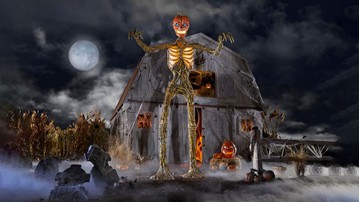 Ha! 13! There are 13 indulgent gifts for Halloween on my spooky luxury product roundup, and I didn't even do it on purpose! It just happened. 13! Ha! Or rather, Boo!

Note: All luxury Halloween costumes and decorations are priced as they were at printing on September 8, 2022. Pricing, and availability, are subject to change.

As Brian Fellow would say, this giant stuffed tarantula is "one fuzzy bug. That's crazy!" And though he'd still be wrong about the bug part, Lifelike Spider Art's supersized arachnids are indeed fuzzy. Very, very fuzzy. And cuddly too.

It's that time of year again. Gotta watch out for the ol' vent dragons building nests in your air ducts. Pushing through the grilles when they get jumpy, or smell bacon cooking. Tempting your children, possibly your wives too, into adopting them as pets. Don't succumb, dudes! The vent dragons are intruders, not pets! They're invading your home, not protecting it! They're the reason the whole house smells like raw meat in a musty cave every time the heat or AC kicks on!

Vent Dragons come from the mind and hands of fantasy artist David Lee Pancake. (Yep, his name makes me hungry too.) They are not, I repeat not intended to fit over your actual air duct vents, unless you want to tempt the dragons to breathe actual fire.

Whether you're going for Boo! or Bow down! Dan Schaub's intricate, breathtaking deity masks will make terrified trick-or-treaters or mesmerized loyal subjects out of all who see you wearing one.

Schaub's mask designs take inspiration from traditional wood shaman masks and contemporary geometric art. He stacks and glues layer upon layer of laser cut birch plywood to build them, and then adds dichroic acrylic lenses for the eyes. The lenses reflect light, upping the eerie deity effect, but are easy for the wearer to see through. Some of Schaub's mask creations are also lined with sound-reactive LEDs, meaning they'll light up and jump around in sync with your voice if you're going for the looming, fearsome god look, or dance to the music if you're a god who's just here to party.

Home Depot followed up the spooky success their 12' Skeleton from Halloween 2020 with a 12' Inferno Pumpkin Skeleton with LifeEyes (i.e., LCD eyeballs and lids that blink, move, and dilate) for 2021. And while the original seems to have died for good, ol' Pumpkinhead is back for Halloween 2022.

They never get old, and they never get less disturbing. Landon Meier handcrafts these babies (<---get it?) individually, signs and numbers them, and includes a display stand when they ship. So you're not limited to physically wearing Disgusted Baby, Happy Baby, or Cry Baby, or to showing them off only during spooky season, in your efforts to creep people the F out.

This Alien Statue from Area 51 is pretty much life-size (I mean, aliens seem pretty short, right) at 5 feet tall, and glows outer-space-radioactive green in the dark, so it's obviously a choice pick for anyone getting a jump start on Halloween decorations for the front yard.

You gotta be a big fan of Michael Myers, Halloween, horror movies, and/or creeping people out to drop $650 on a 14K Gold Michael Myers Pendant. It's not even made of hand-cut diamonds - though I'm sure there's some cutting involved in this pendant somewhere. Fitting that it's made to wear around your neck. Michael Myers' sparkly, bejeweled face is actually filled with cubic zirconia stones, and the rest of him is made of brass. The 14K gold comes in only for the plating.

Nightmare on Elm Street fanatics who don't mind that their Freddy Krueger Fire Pit won't arrive until Halloween 2023 will receive the blazing backyard terror complete with Freddy's bladed glove resting under his chin, and sticking out to ensure he'll draw blood even if you do manage to stay awake.

Wanna be a copycat? Like, copy your cat and become a copy of your cat? Yeah, you probably do.

And if you already own the Licki Brush the news that Japanese company Shinto Michiya will make you a furry human-head-sized replica mask of your own Goose or Bella may have just made you pee your pants soil your litterbox. Hope you've got the $2,700+ in cash it's going to cost you to go full-on SWF.

The giant ride-on dino gets its formidable size from the cowboy him/her/themself, who must have some skills with the stilts to be able to wrangle T-Rex through the party in this costume. Those who doubt their ability to maintain balance and coordination on a pair of 31" stakes - especially after hitting the witch's brew - might consider playing ventriloquist to one of animatronics designer MCD Dino's dinosaur arm puppets instead.

It's gonna be tough to schlep this garden gnome around the world with you for photo ops, but I'll bet if you do the 8-1/2-foot lawn ornament will help your Instagram account go viral. Who wouldn't want to follow Gottfried the Giant's Bigger Brother from the jungles of Brazil to the slopes of Mount Maemori? Even at his oversized-luggage proportions the adorable little big guy would make a grand traveling companion, and probably fit in even better than you do at stops like the Montana Magica Lodge in Patagonia and the Treehotels in Sweden.

Or you could just plop him in your front yard for Halloween.

Halloween Ends is coming to a streaming service near you, and possibly to your kids the moment they see this 35-foot inflatable Michael Myers in someone's yard when they're trick-or-treating this year. And in both cases, my sense is that the best adverb to describe how Halloween Ends will be "badly." I mean, series almost never finish well, and as for the kids...damn. Thirty-five feet of Michael Myers lit up and looming above, swaying in the wind with what's gotta be an 8' chef's knife dangling from his hand - that's enough to scare the snack-size Snickers out of a grown-add dude like me.

Ladies, want some kitties for your titties? And your kitty, because this black cat bra also comes with a matching thong. The lingerie set from Adore Me adds a pair of cute cat pasties to an unlined black tulle bra, plus...