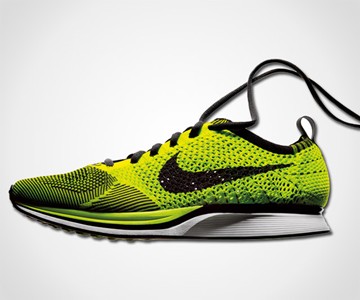 Nike's ultra-light, Olympic-centric, environmentally-conscious Flyknit HTM collection was released in a limited run at 21 Mercer on February 21st (get it?) They should be available to the $160+-carrying masses over the next few days, though who knows? Maybe Nike honchos Phil Knight and Mark Parker will hold out on us until they make sure the University of Oregon men's athletic programs get several thousand pair, and have enough time to rotate them into a few gay uniform combinations.

The Flyknit name stems from a technology 4 years in the making--featherweight, formfitting yarn and fabric variations interwoven and engineered to create the feeling of a second skin, while still providing the coverage needed to maintain the integrity of wearers' movement. The upper portion of each shoe weighs a mere 1.2 ounces, and the entire shoe only 5.6 ounces (stats are for a size 9).

Nike designers Hiroshi Fujiwara, Tinker Hatfield, and Mark Parker currently have three models of Flyknit HTMs set for the shelves: a Racer in blue, which Nike athletes wore during the Olympic qualifying trials in January; and two Trainer versions in white/volt and black.

Here we go again. Back to school. Into fall. And preparing for weather that will require us to wrap up in quilts, and slip our feet into boots, and, if you're Clarks Quilted Walllabee Boot, wrap up our feet in quilted...

While I maintain a policy of running only in emergency situations, such as being about to miss a flight, or beating people who look like they're headed into the same line or restaurant I am, I do understand others run...