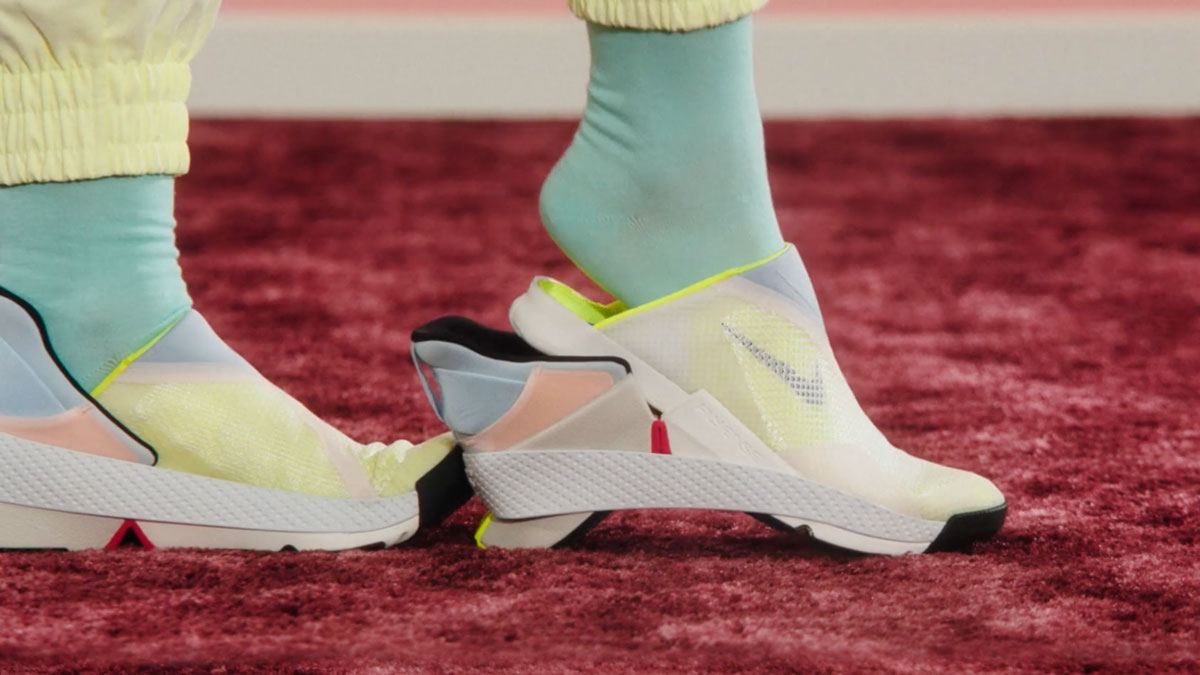 Meet Nike No-Hands! Nike's GO FlyEase slip-ons reflect the company's first attempt to design shoes that keep your hands entirely out of the foot equation. Sliding the laceless kicks on - and off - is a 100% hands-free endeavor engineered to be as easy as Cinderella reuniting with her glass slipper.

The GO FlyEase transcends your typical slip-on, and avoids sliding into heel-less slide territory - with a bi-stable hinge and tensioner. The hinge mechanism, inserted right at the break between the shoe's heel and midsole, allows the GO FlyEase to stay in place in fully flexed and fully extended positions. That is, when you want to take your shoes off, it bends, allowing the heel end of the sole to shoot out the back, and then stays in that bent, sole-protruded position until you're ready to re-shoe. At which time the process reverses, with the sole at the ready to slip your foot into without grabbing onto the shoe's upper.

The tensioner is a band that wraps around the heel to keep it stable and in place as you step on the shoe with your other foot to slip it on or kick it off.

Nike will release their GO FlyEase hands-free shoe via invite to "select Nike Members" on February 15, 2021, and to the general public later this year.

Coming June 2022 to a Swoosh store near you: Nike ISPA Links. Fly modular sneakers with 3 interlocking pieces that connect without glue. And when I say "fly," I don't mean fly-ass. I mean fly-eye. As in, what the soles...

By: The Mandem Safe »

Swoosh your stash so sticky fingers won't swipe it. Except...bummer. The Mandem Safe, a keyed crypt for your valuables that looks like a Nike shoebox, is still just a prototype. So even harder to get right now than a...

Nike is a little early for April Fool's Day, but I guess they wanted to get the Air Max 1 Golf "Grass" word out soon into the 2019 PGA Tour, and build some hype for the sneakers. Which, as far as I can tell, are real...

If I heard about Nike's new Benassi JDI Fanny Pack men's slide sandals without seeing them, I'd probably ask whatever yay-hoo was telling me about them if he needed some shoes to go with his Dadbag and Swoveralls. Or su

Nike's ultra-light, Olympic-centric, environmentally-conscious Flyknit HTM collection was released in a limited run at 21 Mercer on February 21st (get it?) They should be available to the $160+-carrying masses over the...

Sneakers: Next Size Up

Milk's forthcoming Sneakers: Next Size Up is a 2-volume tome on sneaker culture begging for display on the shelves and coffee tables of sneakerheads...