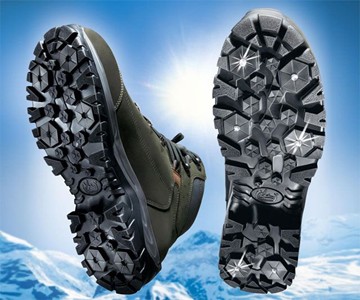 They're like Wolverine claws for the bottom of your feet. These Meindl retractable spike boots stick it to ice and snow with their patented, perfect traction Tec Vision spike system. When wearers flip out the boots' heel dial and turn it 360 degrees, six crowned spikes made of tungsten carbide emerge from each sole to steady and support trekkers in everything from crunchy snow to pure, frictionless ice. Ahhh how I look forward to a winter free of wet back pockets and bruises on my ass.

The tungsten carbide in Meindl's integrated spikes is twice as dense as steel and nearly as hard as diamond, so they won't bend or warp even during extended or repeated use. Multiple seals around the retraction/extension locations also prevent wetness and cold from infiltrating the foot inside, as well as moisture and dirt from impeding the dial and spike function.

Boots themselves are waterproof, and have been fitted with Gore-Tex lining and a removable lambkin inner sole for insulation.

The only thing I like to shovel is food, into my mouth, so I am very happy to see the Snowbot autonomous snowblower making its way (in a haze of white powder!) to market. A Roomba-style robot for the outdoors, the Snowbot...

The Assled is a new wearable snow sled from Snowfeet, a Czech company in the business of making unique recreational snow products, and naming them exactly what they are. (See their namesake Snowfeet, and Skiskates</

If you think the Malicious Bar Stool is, er, malicious, check out what designer Merve Kahraman based her design on: ancient times' "Chair of Nails Torture," seating dotted with impalement-ready spikes, and used by inquisitors...

RemEmber Teva's Ember Moc slipper-style indoor / outdoor shoes? Well, Teva decided to ReEmber the Moc this season, and has even added some variety, and a few inches to the line in the ReEmber Mid Moccasin. These men's...

This cordless electric snow shovel from Earthwise is also aptly described as a snow thrower. A snow caster. A snow dozer. And, if it works as advertised, a snow superhero...

The best part about SnowClaw's Backcountry Snow Shovel? OK, maybe second best part, after its ability to help you out in a snowed-in car emergency. The shovel is a multi-tool that can also double as a sled, so when there's...