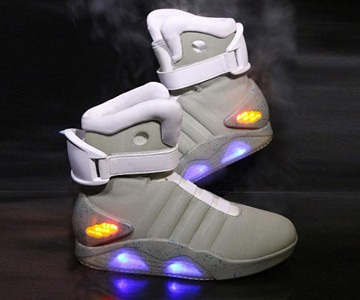 $98.99
from HalloweenCostumes.com »
Check It Out

In 2011 Nike made 1,500 pairs of Marty McFly 2015 Air Mag replicas and auctioned them to benefit The Michael J. Fox Foundation for Parkinson's Research. Rumor has it the company will release another round, this one with the fabled self-lacing feature of those in Back to the Future II, next year. Probably around the OUTATIME DeLorean's October 21, 2015 landing date. In the interim, HalloweenCostumes.com has another Air Mag replica for you. They don't lace themselves, but they do look pretty sweet, as well as illuminate the night with a trio of built-in, rechargeable LED lights.

The Marty McFly kicks are officially licensed by Universal Studios, but not by Nike, so you'll have to sacrifice the trademark Swoosh if you get a pair of these Air Mags. Or cut one out of construction paper and just glue it on. I guess that's a fair trade for getting full production runs of the shoes, and making them available to the general public. At under $100, they're not a bad price either.

Fury's Tactical Kuba-Kickz is a lightweight plastic, spiked insert that fits between the weave of shoelaces and serves as a--how do you say?--balls-on accurate, devastatingly effective, though non-lethal self defense...

I suppose calling these shoes PaleoBarefoots, their true name, appeals to a wider market, given the current eat-and-function-like-a-caveman craze popularized by the likes of CrossFit and Mark Sisson, but Chainmail Shoes...