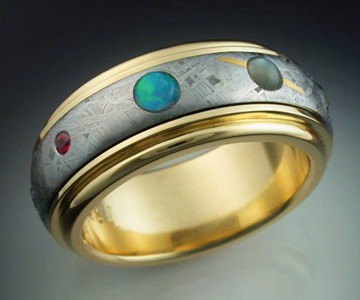 $4,280
from Metamorphosis Design »
Check It Out

Why should ladies and rappers get all the fancy jewelry? John Biagiotti of Metamorphosis Design believes men should be able to get in on the expensive gifts and signs of baller status too. Men like you and me. Men who dig science, the solar system, things that come crashing to Earth from outer space. Here he's folded some of that masculine enthusiasm, plus something shiny and something spinny, into his Nine Planets ring.

Now the Nine Planets Ring has 3 trump cards over the fat rock on the fat finger of the lady slurping her coffee next to me:

Nine Planets Ring meteorite has been etched with nitric acid to bring out the unique patterns of iron meteorites, called Widmanstatten figures. Planet stones include:

This Nine Planets Ring weighs 26 grams and measures 10.5mm wide. It can be custom made in any size, and is also available in an 8.5mm wide version so that ladies, begrudgingly, can get in on the stellar action too.

Muchas danke to David S. for the Dude Product Tip.

At first I saw this box of Chocolate Planets and was like, "1-2-3-4...9! Martin's Chocolatier didn't diss Pluto in their presentation of our solar system in luxury confection form!" But then I read the Chocolate Planet...

On top of their sweet swirly interpretations of what our solar system would look like if it were made of heat-wrapped glass and sized for juice drinking and candle burning, two things are cool about ThinkGeek's Planetary...

From the Milky Way to a galaxy far, far away. After our own solar system proved to be a stellar success amongst MVEMJSUN lovers, Star Wars is taking its turn to front Think Geek's latest Planetary Glassware Set. Meet...

MOVA Globes are nothing if not resourceful. The striking pieces of planetary art not only silently rotate and glisten all the livelong day, but they do it without the use of power cords or batteries. This cosmic event...

Otherworldly neon suction cups for the legs! Artist James Lillis took a NASA photo of an actual galaxy, and transposed it onto tongue-waggingly tight leggings in purples and blues so riveting anyone who gazes upon them...