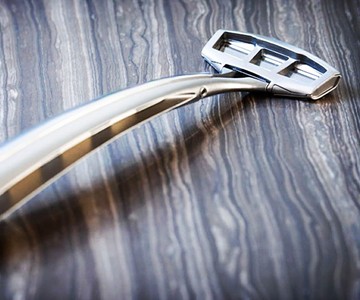 I'm only telling you about a $199 razor because it used to cost $100,000. So they say. And also because they, the creators of Zafirro, also say their razor's sapphire blade make it the World's Sharpest, and longest lasting. The company made their first 80-atoms-to-the-tip Zafirro in 2011. It was called the Zafirro Iridium and, thanks to 4 years of R&D and a Santa Claus sack of problems and missteps, its retail price was $100,000. Next in line was the Zafirro Gold, which came in at a much more reasonable $18 grand.

Now Zafirro says it has cracked the code on sharpness and price point with their latest sapphire blade razor. Second only to diamond in innate hardness, sapphire is also incredibly durable--about 100 times as durable as steel. So a single set of Zaffiro inserts will currently last between 6 and 12 months, and the company believes they can increase that number to several years or more in the near future. They also anticipate blade replacement cartridges will cost less than $49. Over time, the cost of the razor and its replacements, plus the number of blades you'll save your favorite landfill from eating for dinner, could balance out. If Zafirro also provides the superior shave it claims to, I'd call it all worth it.

Read more about sapphire blade technology and pledge for your own Zafirro on the project's Kickstarter page through January 5, 2016.

My appreciation for wipes has grown exponentially as I've gotten older. Now I'm mostly talking about the wipes used on the opposite end of the body as Anthony Glycolic Exfoliating & Resurfacing Wipes, but I've also developed...

Wait, I have to sharpen lawn mower blades? Like, how often? And how big of a time and pain-in-my-ass commitment is it? Yeah, yeah, Grizzly Lawn Gear says with their Lawn Mower Blade Sharpener Drill Attachment Kit you'll...

Become a US Marine Corps hacker, and proudly slash your way through the blackberry bushes in your backyard, with this officially licenced USMC Desert OPS Sawback Machete. Features include a 17-3/10" stainless steel swingin'...