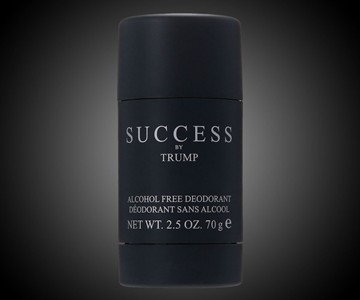 Donald Trump thinks you stink. Particularly if you're: Barack Obama; Hillary Clinton; George W. Bush; Carly Fiorina; Megyn Kelly; any other journalist; any other woman; disabled; Jeff Bezos; an immigrant; a Democrat; a Republican; a Muslim; or someone who is not Donald Trump. But good news! You can stink less if you wear Donald Trump's deodorant. It's called Success by Trump, which is kind of a misnomer because the only success anyone who buys it is sure to achieve is success in giving Trump a few more dollars to spend on haircare and running his mouth off.

And speaking of haircare, Success by Trump is actually a whole line of men's grooming products. It includes cologne, after shave, and shower gel in addition to the deodorant. Mysteriously missing: elaborate combover salve.

If you want to dump Trump into your armpits some key features of Success are that it is a stick deodorant (though much smaller than the one up Hillary's...), contains no alcohol (the Donald needs that for himself), and has a juniper scent (which Trump almost vetoed due to the berry's first syllable).

Aside from the fact that the Wahl Peanut Hair & Beard Clipper looks as much like a nutsack as it does a peanut, have you ever seen a better Father's Day gift for Dad? Or better, Grandpa? Dude, one constant in my life...

According to the Scruffie leg and neck shaver, "The Scruffie is a shaving tool that allows you to shave your legs and back of the neck." My question is: but is it? Is this razor with a hydra's worth of heads really going...

Japanese grooming brand Nikken Razor Co. has developed some tweezers specifically for ear hair. And they're not calling them Twearzers. In fact, it doesn't look like they're calling the coiled spring follicular grippers...

I'm gonna start the New Year right, with a resolution to Takumi No Waza Green Bell Nail Clip my nails when they get too long or split, instead of biting the shit out of them...

They say it's like an umbrella for your face. And also that it's the best dam invention for keeping your whiskers dry. The Whisker Dam sits over a pint of beer (or milk, or triple mocha with extra whipped cream) and prevents...