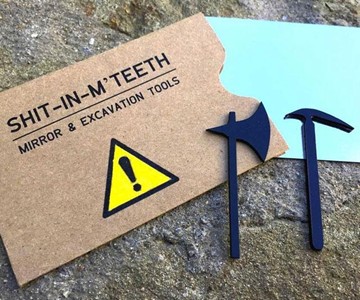 $5
from Kickstarter »
Check It Out

SHIT-IN-M'TEETH is a credit card-sized set of oral hygiene helpers. Created by Erik Noyes to combat "dental damnation", it includes a pick axe, jack hammer, battle axe, sword, missile, some traditional toothpicks for good measure, and a mirror for navigating the extermination effort. The tools will arrive laser-cut for popping out of a piece of die-stamped plastic and the back of the mirror will include SHIT-IN-M'TEETH operation instructions.

Hoping to end the embarrassment and shame of conducting your day with a large hunk of blueberry or extra course grind of pepper lingering in your lateral incisor, Noyes is promoting his SHIT-IN-M'TEETH tools on Kickstarter through January 1, 2015.

Just one question about the TempTooth Temporary Tooth Replacement Kit: does it come in gold?...

Do you like big, bold, whack-you-in-the-face flavors...in your toothpaste? Then grab a tube of Chilly and let this ghost pepper and twice-mentholated toothpaste take you from the blistering heat of Death Valley to the...

No computer, tablet, or phone needed to ping! your co-workers with this slick and stealthy mini crossbow. The palm-sized launcher loads up with toothpicks or Q-Tips, depending on how hard you want to let Dave three desks...

Take a gnashing bite out of your next repair or DIY project with the Denture Screw & Drill Bit Holder, an equal parts clever and disturbing 3D print from Etsy vendor MacGyver Dood.

Each tooth socket in this vibrant...

Land shark! Or at least the scariest part of the shark now available to tear into human flesh on land. Dane Kealoha's shark tooth weapons style themselves after traditional blades and blunt implements with walloping power...