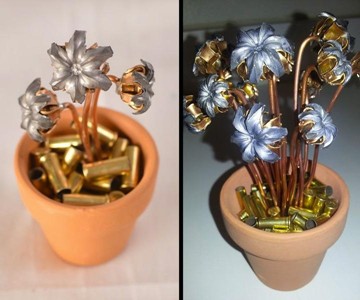 Bullet Bouquets. No better way to call them than that. And just as cool as these loaded pots of blooms: gung-ho shooter and artist Anthony Zambai saw the idea for them on Reddit less than a week ago. When the Bullet Bouquet was presented on the front page of the Internet, a ton of people responded with comments along the lines of...Dude. I want that. So this clever dude and his wife, Amber, set themselves the goal of crafting an entire business over the weekend. They researched, created prototypes, bought a domain, built a website, set up a Facebook page, and opened the online store, Bullet Bouquets, in exactly 3 days. No better way to be American entrepreneurs than that.

Now you can get your own Bullet Bouquet, made of authentic, spent hollow point bullets. Sold as tiny pots of 3 to 12 "buds" each bouquet contains copper jacketed lead bullets that have been expanded, deformed, and turned inside out post-firing. Each bullet has been clear coated for "mostly" safe handling, though Zambai does recommend washing your hands after handling the bouquets, as well as keeping them away from children and pets. Awww, how romantic.

A 20-gauge shotgun shell thermos that holds only 16 ounces of liquid! Could they not have added 4 ounces so it makes more sense? Why is it so difficult for people to be smart and think logically? Anyway, this Shotshell...

Plant flowers, not bullet wounds. That's ST lab's rosy goal with Flower Shell. The Scandinavian company, which has developed several trendy, quirky, and what they hope will be considered visionary products, plans to release...

It's like the Hopside Down Beer Glass but with more of a bang. And I hear even better than a punctured aluminum can for shotgunning a Bud Light. As you can imagine, filling the 50 Caliber Bullet Beer Glass requires minimal...

If your 16-year-old daughter is going on a date with some punk kid and he comes to pick her up at your house, is it more or less intimidating to be cleaning your guns with a bullet-shaped gun cleaning kit? On the one...

They pulled the trigger so you can push the pin. This set of 8 Bullet Casing Push Pins come to you and your cork board from real, once-fired, American-made 9mm bullets. Seller Lucky Shot promises the conversion of the...

Jacob Bromwell's set of Old West shot glasses are pure copper, handmade by up to 5 American workers, and in very limited supply. So get 'em while they're smokin' hot, and you just might have the perfect beginnings for...