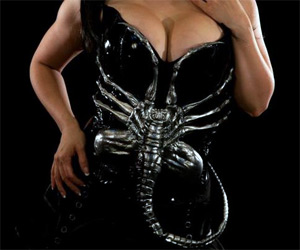 I just cracked the ever-loving Alien, Aliens, Alien 3, Alien Resurrection, Alien vs. Predator, and Aliens vs. Predator: Requiem out of my knee cap on the corner of a coffee table, but somehow, as I gaze upon the Chesthugger corset and...its contents...I feel no pain. A glorious accoutrement for the midsection, the Chesthugger calls forth the two most powerful torture devices on earth for slimming a woman's waistline: a boned, fat-choking depriver of oxygen and an arthropodic, gut-seizing facehugger.

Costume designer Carlos Blanchard of Rage Custom Creations conceived and brings to life the Chesthugger for ladies with a true edge, as well as those looking for the best birthday present ever for their husbands or boyfriends*. Facehuggers are forged from rigid vinyl, and made to order in any color buyers want--featured is a baby alien in chrome. They can also be treated to look aged, or kept in the image of the clean and sparkly parasite in the photograph. Blanchard has also agreed to customize facehuggers with handpainted designs, such as a Hello Kitty (an actual request, which, while disturbing, is also somewhat reassuring, as I thought I was twisted) but that's gonna cost extra. The creature's tail has a foam filling and rigid wire structure, so donners can shape it to their individual waists. Unless in an act of proboscis-thwarting self-defense, please keep the facehugger away from extreme heat.

The Chesthugger corsets themselves are pre-made and come in two styles, one of which includes a red color option. If available sizes are not suitable, Blanchard can have a friend custom make one for some mas dinero.

Though the Chesthugger is not likely to implant an embryo in its host, women vehemently opposed to birthing a chestburster should probably opt for some Lady Warrior Armor or an Adrenasuit instead.

*Dudes, also highly recommend a night out in the Chesthugger as payment for wives or girlfriends on the losing end of bet.

Call this Alien Butler Roswell, because everyone has heard of Roswell, and no one has heard of his (her? their? its?) real name, Keilleilleillopeenope. Or, I don't know, maybe the little alien's language doesn't even...