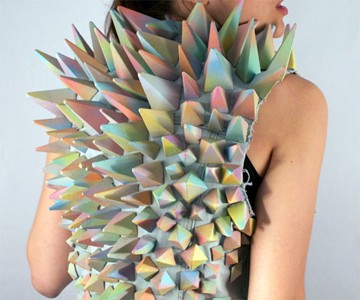 OK, maybe this spiked pastel vest will make the lovely vixen who wears it look more like an ankylosaurus than a stegosaurus, but considering I had never heard the word "ankylosaurus" before in my life until I Googled "spikey dinosaur" (and Google said, "Did you mean spiky dinosaur?") I'm calling it by the Jurassic household terminology I grew up with. Designer Mallory Weston has actually named it her Stud Vest, which I'll grant is also fairly accurate, as the edgy spikes combined with the vest's swirly feminine colors are sure to turn anyone it enrobes into an instant stud.

The stegosaurus base is a women's size S light blue denim vest that Weston has adorned with hand-cast and spray-painted concrete studs. Yep, concrete. So it makes for both a true spiked shell of armor, as well as a weighty piece of art whose wearer better have a decent load-bearing capacity.

I should have found 13 cool products in orange & black to make this compilation even more true to the Halloween spirit I claim it embodies - or rather, disembodies. But I'm lazy, so you get 12...