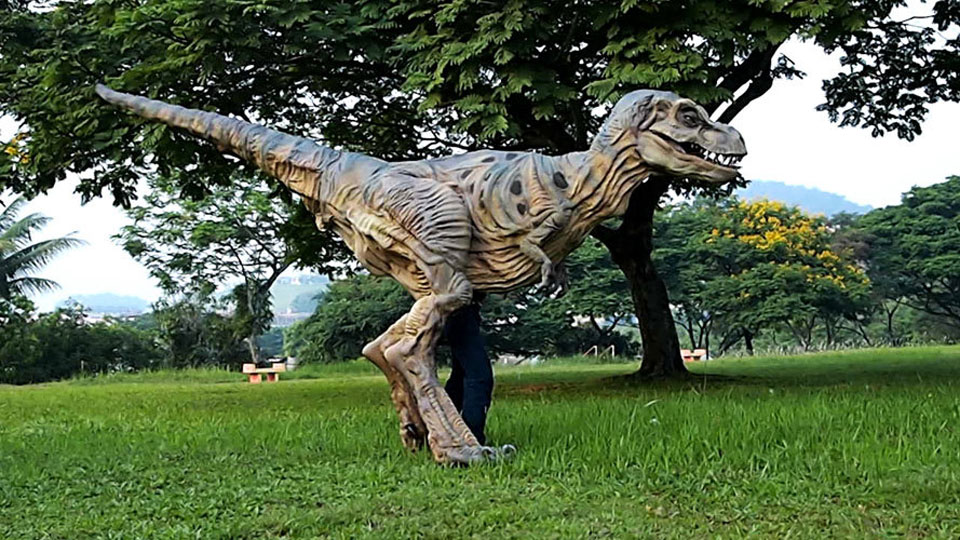 Sometimes babies are born with disproportionately large body parts, which they subsequently grow into. Like dog paws and human eyes. No such luck for the baby T-Rex. Looks as if those little guys are stuck with midget arms from day 1, and just keep growing out of them to the tune of 0 pushups in gym class, and high-fives that produce nothing but head butts after another winning game of Massacre a Herd of Triceratops. Oh well, Life-Size Baby T-Rex still makes the list of Costumes That Definitely Don't Suck.

At 16 feet long and over 50 pounds, whomever shows up as this carnivorous spawn of the Cretaceous Period better be ready to absorb adoration from the masses, sweep the ladies off their feet, and start seeing a chiropractor on Monday. Jeff Teo of 3D Wizart (also featured for his life-size versions of Yoda in Carbonite and a Ghostbusters Slimer) fabricated his T-Rex Jr. from rigid rubber, high density foam, aluminum, and fiberglass. The same materials I once tried to make a girl out of, though Teo's efforts seem to have produced a far more realistic and, er, usable outcome. The costume also undergoes hand sculpting and texturing.

Baby T-Rex also comes alive by way of cable animatronic mechanisms, which produce smooth movement at the mouth, eye, and neck areas. Note: Growls and roars have been incorporated into the above video, but this version of the costume does not include a sound module. That's cool, though. When it's not full of Miller Lite, Cheetos, and shots from a spray can of whipped cream, that's what my piehole is for anyway.

If T-Rex can't high-five or do pushups, then you in a 3D T-Rex Ugly Christmas Sweater can't sit down or move freely without risk of taking out people's drinks and cheese plates...

Holy crap, as if I weren't already terrified enough of this beast! Now they have to go and put a raptor costume on it. Well tiny dinosaur dog, now you can keep your beady eyes, your snaggleteeth and your flesh-flaying...