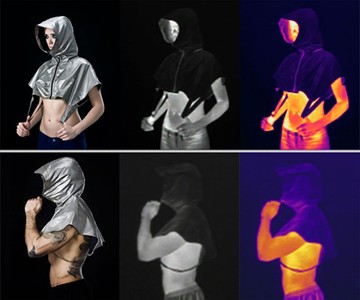 Privacy crusader Adam Harvey builds off of his last experiment with fashion as a means of confidentiality, CV Dazzle, with a new line of counter surveillance clothing termed Stealth Wear. While the CV Dazzle system focused on natural methods of camouflaging facial features from computer vision, Stealth Wear garments aim to elude a variety of sophisticated surveillance equipment and techniques.

Though still in experimental stages, Harvey plans to release Stealth Wear testing videos examining the clothing's technology, counter technology, and his refinement process as he works to make the garments available for public use.

Suggested via Dude Product Tips by Jack. Thanks, Jack.