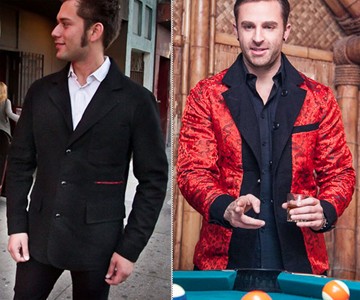 I don't usually smoke, but when I do, I also like to dress up like a Red Dragon, wear a monocle--in both eyes--and sip whiskey out of my Swig & Puff Flask. I also like when the dragon costume is subtle enough to wear to work. And holy smoking jacket, it's as if Betabrand's marketing team had their last product development brainstorming session inside my brain. Nothin' but thunder in there, 'ey guys?

While I have sole ownership over all red dragons, Betabrand has released a full line of slightly less cool, but still pretty cool reversible smoking and brandy sipping jackets for the rest of you out there. Studious exterior textiles, such as moleskine, corduroy, and linen open up to silky, mack-ready poly-rayon patterns primed to transform their wearers into a Gray Wolf (royal blue and silver), Poseidon (gold), and Lord Boozington (powder blue).