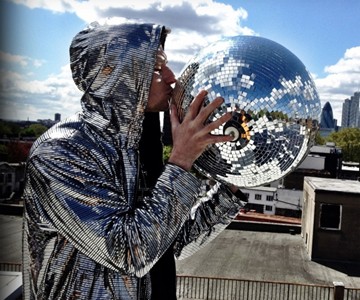 Betabrand, which also gave life to the Dress Pants Sweatpants, now sets its sights on helping you to, I quote, "make a nuclear-fueled spectacle of yourself" with its Reversible Disco Hoodie. Black cotton business on the outside, prismatic, streaming silver party on the inside, I think the Disco Hoodie may be the mullet of the 2010s.

In the fit department, the Disco Hoodie, like many politicians, avoids taking a polarizing stance in public, and instead meets its wearers somewhere in between tailored and baggy. It fits everyone! Just right! And it promises to serve you well if elected to a hanger in your closet. Hoodie sizes are analogous to T-shirt sizes, running from XSmall to XXXLarge. Sorry, lazy people, but it must be hand washed and line-dried if you don't want to walk around looking like a mirror ball that's been ridden hard and put away wet after a handful of wears.

When you can't remember if Mama said you can't hurry love, or if Mama said knock you out, it's best to cover all bases. These gleaming symbols of betrothal let everyone you encounter know you are blissfully off the market...

The Silver Digit. Excellent. I am one sterling full finger ring away from a new alter ego. I'll look like a cross between the Phantom of the Opera and Dr. Claw from Inspector Gadget. But use my powers only for good, of...

Coin flipping is so Ancient Rome*. The Tempus offers a fresh spin on recruiting the fates to help us make decisions and settle arguments today. A spin that's more contemporary, more in line with our current obsession...

How many bobcats did this guy have to kill just for these rings? Who cares... it's worth it, because these are awesome. Great for punching people in the face and scaring off every woman that has a visual on you because...

Planning to ring in 2013 with a dissociative fugue wherein you assume the life of a JRR Tolkien character? Hey, me too! I'm going with Thorin Oakenshield, King Under the Mountain. I've already booked my ticket to New...