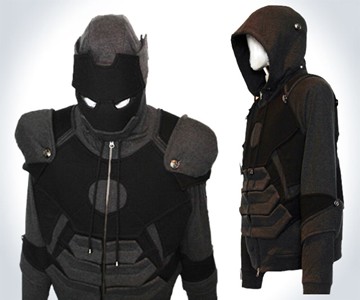 This Iron Man crime-fighting-armor-turned-loungewear combines the Avenger's Mark VII and Mark VIII suits. Its chest and shoulders draw from the former, while the elbows and abdomen take after the latter. Awww, it's like Mark VII and Mark VIII decided to put aside their differences and have a little cotton baby. I just hope that's not like first cousins getting it on. The last thing I want is a hoodie with a bunch of genetic defects.

Iron Man hoodies are unisex, and available in sizes S through 3XL. According to their Korean manufacturer, "After wearing this suit, you can not fly to the sky and shoot the beam like iron man." So perish the thought right now, son.