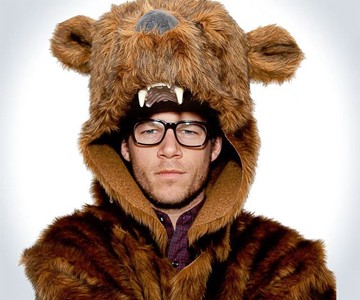 I just named a bear one of my Top 10 choices for animal reincarnation, and now, as if in answer to my plea to the forces of nature, the Griz Coat is back. In time for winter. In time for the holidays. In time for looking like the coolest, baddest bear impersonator on the block.

A runaway success as a Kickstarter campaign, the full-length, faux-fur ursine pimp suits rode the momentum they built with backers into a hugely successful first run--one that sold out, and left many would-be grizzly and polar bear role players high and dry. Until now. Griz Coats have finally returned to our virtual shelves and, as of November 14, 2012 at 5:00 p.m. ET, are once again available for purchase.

Griz Coats' literal and figurative pinnacle, their bear head hoods, are as work-week practical as they are weekend lady bait: far lighter and less cumbersome than an actual bear's head, and probably your own head, and maybe even a Sap Cap; comfy on their foam-lined insides; trimmed with eyes, teeth, claws, and a nose realistic enough to give small children unpleasant dreams; and, best of all, detachable. So you can sport the head solo when you're indoors, on the streets of Mexico, or in other places you might get strange looks for wearing a coat.

Griz Coats come in styles Grizzly and, for $50 more, Polar Bear. Presumably the cost increase for the latter is directly proportional to the increase in ass you're going to get walking around dressed as all of humanity's favorite beast. One size fits most. Meaning most people from 5'6" to 6'3". Huh. Well, Asia, in that case I guess it's not such a big deal that Griz Coat maker Buffoonery Factory isn't accepting international orders at this time. And tiny American males and professional basketball players--ironically, the two factions of our population who would probably be most down to wear a Griz Coat--better luck next time.

The shaggy duvet cover. A little bedspread made of pure comfort, hygge, and dead animals...

Plufl: The Dog Bed for Humans

Welp, we've got dog food for humans, so why not dog beds for humans? Thank you Soylent, and now, Plufl. Plufl is basically a big ol' human-sized dog bed, designed by "avid nappers" Noah and Yuki to create the ultimate...

This Inflatable Bear Suit from Candy Coated Squeaks isn't quite as baffling as the design shop's Inflatable Beach Ball Underwear, but...it's still a little baffling. And still potentially deadly, I'd think, albeit due...