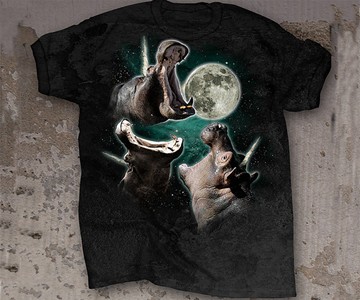 $25
from CLACK! Industries »
Check It Out

Clearly, the 3 Wolf Moon T-Shirt craze was only the beginning. With unicorns making their play for world domination, hogs holding steady as beastly gods due to their contributions to the bacon harvest, and dinosaurs on the verge of a full-on, Michael Crichton-style comeback, I may start diverting my monthly 401K contributions into an animals howling at celestial bodies T-shirt startup. CLACK! Industries seems to have a corner on the Hippopoticorn market, but I also see great potential and many $$$ in the branding of Beavicorns, Allicorns, and Labradoodicorns.

The 3 Hippopoticorn Moon T-Shirt comes in sizes S to XXL.

I've never tried grilled bear, grilled horse, grilled wolf, grilled bull, or grilled ram, nor do I want to. But I would be amenable to trying a ram grill, bull grill, wolf grill, horse grill, or bear grill (not to be...

Giraffe Desk Lamp, you had me at first glance, but I have to ask: why the green shade? I feel like you'd look even more girafferific with an illuminated head made out of the same ash wood as your body. Or at least some...

Are these 3D animal earrings - 3D in both style and printing - not the most adorable skin skewers you've ever seen? From the cat that looks pissed to be stuck hanging from a lobe, to the narwhal who's wondering why he...