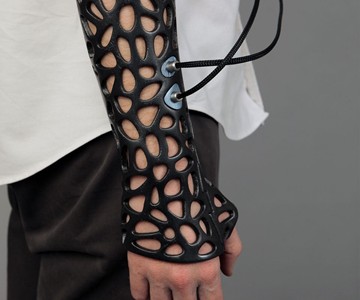 Great. Now kids are going to start breaking one another's arms just so they can get a sick 3D-printed cast with attached bone stimulator to set and heal it. I mean, that's what I'd do if I were a kid. OK, maybe with a few Maker's down the hatch I still would. The Osteoid cast is like a the raddest hybrid of medieval armor and a superhero costume and a sleeve tattoo ever. Yeah...I guess it also smacks slightly of a ladies' glove, but....whatever. If I get drunk enough tonight there's a 52% chance I'm going to have my friend Cornelius run over my forearm with his fat bike.

An A' Design Award & Competition winner, Deniz Karasahin's Osteoid project endeavors to improve the healing experience for people with broken or fractured limbs. The most obvious benefit of his 3D-printed cast over traditional plaster or fiberglass casts is its thorough ventilation of the skin beneath. Did any of you break a bone when you were younger? Was it not the most grotesque pleasure you ever experienced to smell that area of your body right after your cast was removed? It's was like...riper than the in betweens of a big fat fatty's fat rolls. And the best part was tackling younger siblings and smothering them in the rotting organic stench. That said, I think it's a pleasure we can do without, and one Osteoid will largely eliminate.

Despite its open design, Osteoid says it will not sacrifice a cast's structural integrity or bone support capabilities. The casts are 3D printed with FDM from ABS plastic, a strong and durable material that is also slim, lightweight, and waterproof. So the bulkiness, heft, and submersion restrictions of an inches-thick cocoon encircling damaged body parts will also be no more.

Once introduced on a broad scale (the project recently completed a 4-month study in Turkey), Osteoid casts will be fitted via a 3D body scanner for precise patient limb dimensions, and then transferred to modeling software to create the cast design for 3D printing.

If desired, the Osteoid cast can also pair with a complementary low-intensity pulsed ultrasound (LIPUS) bone stimulator system. The holes in the cast have been specifically designed for compatibility with this device. By placing its ultrasound probes directly on the skin over an injured area, LIPUS can help speed the bone healing process with single, 20-minute sessions during each day of wear. Data suggests use of the LIPUS will reduce the healing process up to 38%, and increase the heal rate up to 80% in non-union fractures.

Osteoid medical casts consist of 2 pieces that affix like those of a jigsaw puzzle. A flexible pin inserted into a central hole passing through the edges of these pieces keeps them tightly connected. LIPUS probes attach to casts via a thin layer of rubber at the edges of the LIPUS adapters.

microMend Emergency Wound Closures give new meaning to the term "pinch one off." Marketed as a quick, safe, and way less expensive alternative to heading to the ER for stitches, microMend closures can seal lacerations...

Nothing like a little colorful latex with cockamamie explanations of what you did to require bandage coverage to make paper cuts, minor dicing mishaps, and drunken tumbles look a little more admirable. Each box of What...

Most of these obscenity bandages seem apropos for the injuries they will cover, but who yells, "Balls!" after slicing through Tallman instead of the onion? Seriously, is "Balls!" really anyone's go-to vulgarity when overcome...

Kailo Patch: a giant nanotech pain in my ass, or a miracle solution for the giant pain in my decidedly not-nano ass? The nanocapacitor-packed patch Kailo makers say acts as a "bio-antenna" to turn off pain wherever you...

My ex-girlfriend Karen doesn't need a Flexi Freeze cooling vest because the ice in her heart is strong enough to chill her entire chest cavity, but if you do a lot of manual labor, have to wear a heavy costume, or are...

It sounds fancy, but Cryosleeve maker Recoup is quick to point out that the combination of "cryotherapy" and "compression" their pain and inflammation tool provides is really just a nice mix of ice and squeezing tight...