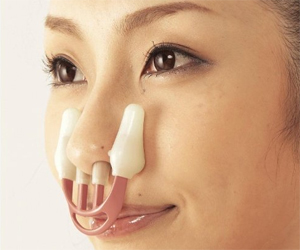 $60
from Japan Trend Shop »
Check It Out

Taking a page from Apple's business model, the world of rhinoplasty has apparently determined that exorbitantly expensive nose jobs have been widely available for enough years now that it's time to do some price slashing. The 3-degree skew of the cartilage at the tip of your nose that you know wasn't there before you faceplanted off the top of the cheerleading pyramid? The saggy nostril inherited from your paternal grandmother (that joyless curmudgeon)? The proboscidean flatness resulting from texting and walking...into things...one too many times? What would have once cost $5,000 to remedy can now be straightened out, plumped up, and reinvigorated for a mere $60 with the Hana Tsun, Japan's own at-home nose straightener.

Though it looks like an instrument of torture right out of a Kafka story, the Hana Tsun clip purports to be a gentle, painless means of balancing and pushing up the bones and contours of the nose. Moreover, it need be worn only 20 minutes per day to metamorphose the wearer's profile from Witchy to Wowza.

Now let's go from $5,000 to $60 to $1,000,000. As in, here's the million-dollar question: do people actually buy these things? Do they believe a silicone and polypropylene device jammed up their nostrils for 20 minutes a day is going to reconfigure their face, and eliminate their nasal complex? Are the Japanese the grand masters of duping, or are they themselves just easily duped? Hmmm, if it's the latter, hey! Entrepreneurs of Japan! You, uh, wanna sell some carrot cigarettes and an AdrenaSuit for us?

Even though Speedcraft AIR nostril-opening sunglasses are designed for cyclists, after 2 full years of pinching off my nostrils with face masks and their bendy metal nose bars, I am really feeling a piece of eyewear designed...