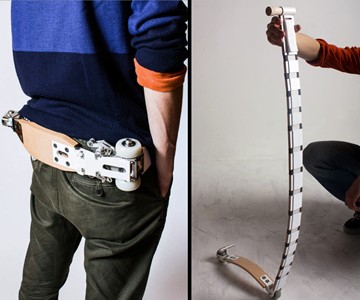 In describing his Belt Scooter, Hungarian student Adam Torok talks about humans' physical need to move around, the invention of the combustion engine, the independence of owning a car, and some mumbo jumbo pertaining to the environment and virtual movement on the Internet. What he doesn't say so much about is how rad it is that he created a belt that Optimus Primes into a scooter. One, it appears, you could actually ride on some day when you're feeling all minimalist and eco-friendly and anti-combustion engine. Well done, Mr. Torok.

Torok is student specializing in industrial and product design in Sopron, Hungary. The Belt Scooter was his 2013 Degree Project.