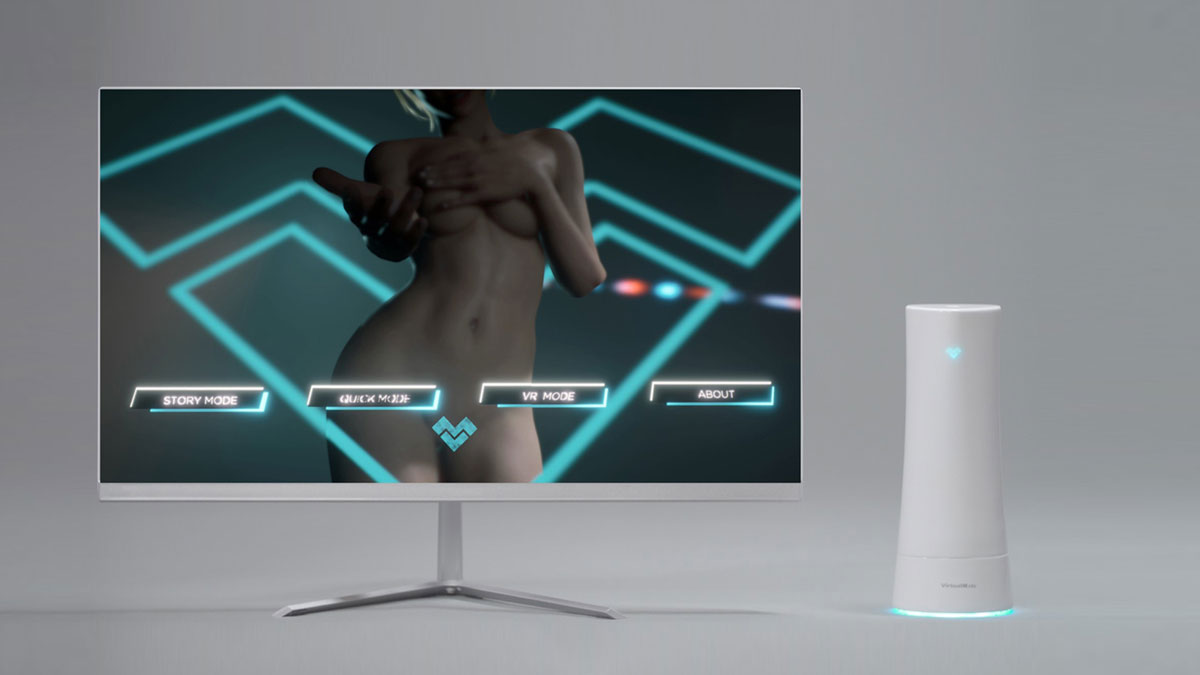 The long wait for your Mate is over! Virtual Mate, following a very successful crowdfunding campaign, has released some very slick - like, Astroglide slick - new technology. Self-described as "the world's first virtual intimacy system," Virtual Mate is a hyper-realistic VR sex game for your PC, laptop, mobile device, or VR Headset primed to beguile and get off everyone from gamers to, well, dudes with a pulse.

See the lovely lady in the image above? That's Sheila. Virtual Mate V.1., who doesn't look so virtual to the eyes of this dude. You dudes can also see and hear her in action (NSFW action, mind you) in the accompanying video, as well as on the Virtual Mate website. Virtual Mate has recently also launched the Live Sheila Show for those interested in some foreplay leading up to the full VR intimacy system's release.

Not bad, 'eh? And Sheila is just the beginning.

In addition to the lifelike Sheila game graphics and movement, Virtual Mate comes with a multi-functional piece of hardware they call the Core. As in the Core of your lust. The Core of your pleasure. The Core of the reason you start staying home alone on Friday nights rather than risking another bunk Tinder date that goes nowhere. The Core collects and transfers motion data (read: jacking off) to your Virtual Mate. Sheila can "feel" and react to depth, speed, and strength, and respond in real-time.

As for the game component of Virtual Mate, you can choose from 3 play modes: Story; Fast; and Video. Story mode requires the most time, but for dudes who like buildup and role-playing, it's one of the most distinctive features of Virtual Mate. A kind of sexy, interactive Choose Your Own Adventure game. Story Mode allows plots to unravel and grow in the same way as a big-budget Hollywood film. You'll learn more about Sheila as you spend time together, and, according to Virtual Mate, "build a deeper connection with her. It's a physical, mental, and emotional journey." Video Mode uses the built-in browser in the Virtual Mate game to allow players to browse videos online and sync their core with any 2D, 3D, or VR video.

Virtual Mate has also developed a game launcher to support Virtual Mate games and game update releases. That's how you, and the thousands of virtual players (virtual playaz!) now using the system, will log on to access to Sheila and her sexy games. Plural, as the launcher is ready to dock other games with similar themes, reinforcing Virtual Mate's goal of becoming a world-class Virtual Intimacy Gaming Platform, not just a single brand of sex romp.

To further their progress, and create a more versatile and immersive experience, Virtual Mate is opening its hardware connection to interested third-party game developers so they can build and upload their own characters or games to the Virtual Mate platform - is that any of you dudes? If so, Virtual Mate has released its SDK, enabling 3rd party developers to connect different games with Virtual Mate Core.

Equally appealing, Virtual Mate is seeking to expand virtual girlfriend options beyond Sheila. They've selected other (real) women to serve as potential future models, and as the system gets authorization from more hot celebrities and influencers they can to turn their likenesses into Virtual Mates too. The company is also working on a version geared towards women.

Click here to read more (and see more NSFW stuff) about Virtual Mate, and to become an early explorer of the VR sex tech with the purchase of your own Virtual Mate virtual intimacy system.