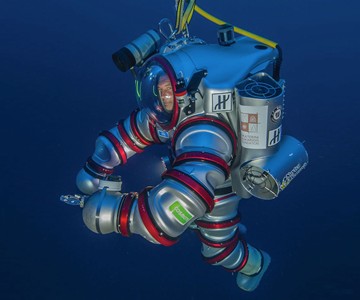 $825k
from Hammacher Schlemmer »
Check It Out

When all the other kids in Phil Nuytten's class said they wanted to be astronauts when they grew up, Phil went rogue and said he wanted to be an aquanaut. Then, while all the wannabe astronauts ended up living in their mamas' basements for several years after college trying to think of clever things to say about crap they saw on the internet, Phil not only became an aquanaut, he invented the EXOSUIT that allows him to do it.

EXOSUIT is an atmospheric diving system (ADS) that essentially places its wearer inside a self-contained, self-propelled underwater vessel. It's made of hard metal smithed together with 24 sealed A536 aluminum alloy rotary joints that provide full mobility and body articulation inside it. While maintaining sea level air pressure and providing a 50-hour oxygen supply, the suit will give divers access to sites ranging from coral reefs to shipwrecks to crevices of the sea up to 1,000' deep.

EXOSUIT power comes from a quad of integrated 1.6HP thrusters that facilitate vertical, horizontal, and rotational movement. The "human submarine" also has:

The Pelican Marine Series Waterproof Floating Phone Pouch is available in Olive Green, Stealth Black, and - are you ready, Mama? - Garden Party Blue. Flowered, feminine, and perfect for all the times you drop your phone...

You may not be singin' in the rain wearing a DexShell Waterproof Watch Beanie, but if you're out when the wet drops start to plop, at least your head will stay dry as you run, hike, camp, fish, walk to work, walk the...

Breakwater Supply stashes their 101-piece survival-ready first aid kit inside a 2L, 100% waterproof and reflective dry bag with a roll-top closure. Choose from bright Red or Stealth Black bags, the latter for ninjas who...

Nothin' like sittin' on a wet stadium seat, picnic bench, or muddy slab of ground. Especially when the wetness really starts permeating your skin and making your butt itchy. Numb and itchy if it's cold out! And now here...

Crocs. Gotta love 'em for persisting in existing, and always pushing to stay relevant in the marketplace. Except I still hate 'em. All of 'em, including the new Crocs Crush Boot, which is essentially a more affordable...