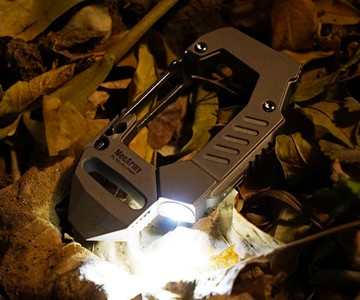 MecArmy says their FL10 is "probably the first carabiner coming with a flashlight." Probably. They're too busy churning out TC4 titanium torches styled after climbers' favorite clips to fact check, but...yeah, probably it is.

The FL10 carabiner's flashlight outputs up to 360 lumens, and contains a 100mAh USB-rechargeable lithium polymer battery. The bulb should have a lifespan of up to 50,000 hours. You can also use the MecArmy carabiner, or at least not worry about in dangling from your bag, in the rain, since it's IPX5-rated water resistant.

In addition to lighting the way as flashlight, the carabiner has a bottle opener feature at its closure, and comes with a paracord attachment. MecArmy finishes the FL10 with a permanent black or sandblasted coating they says is corrosion- and scratch-resistant. A titanium switch controlling the flashlight portion of the carabiner is designed to prevent accidental activation.

The MecArmy SGN4 is a USB-rechargeable LED flashlight with 160 lumens of power and a 40-meter beam projection distance stuffed into a case sized for keychain EDC...

The MecArmy PS14 is a 1200-lumen tactical flashlight able to shine its super bright beam, in full, around 330'. It is IPX8 water-resistant for use even in heavy rains, and even has a trident tail section for emergency...

They call it a flashlight, but turn on the handheld Tiny Monster, or TM26, from NiteCore and you might find the 3500 lumens it emits look more like a punch in the face from the sun. They say it's the world's smallest...

When Mother Nature throws darkness, you throw Olight. And when some dude in the park throws shade about your obnoxious flashlight, you...don't even notice because the Warrior X Turbo is throwing a full 1,100 lumens of...