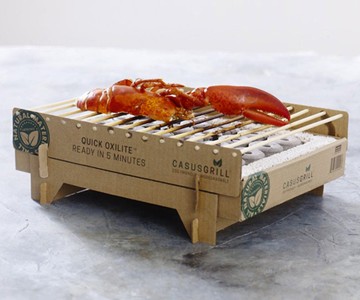 $8
from The Fowndry »
Check It Out

Biodegradable and 100% natural, the CasusGrill leaves no trace when you dispose of it. Which is more than I can say for the oysters my friend Cornelius grilled at his anti-Taco-Tuesday BBQ last night. I disposed of at least a dozen (3 dozen?) of those things and they feel like they're still degrading in my biosphere, and leaving plenty of trace each time I hit the john.

Don't worry though, it's not so bad that I can't think about my next meal, and the next 25 after that. Come July 2017, one of those meals could be cooked up at Eightmile Lake on the CasusGrill. The Danish Design Award-winning grill assembles from: an FSC-certified cardboard box lined with naturally occurring lava stone; a (non-burning) bamboo grill rack; and Quick Oxilite bamboo charcoal briquettes. In addition to its biodegradable composition, the CasusGrill fires up and gets hot enough for the burgers, skewers, and fresh-caught fish in around 5 minutes.

The 12.2" x 9.25" x 2.16" cardboard contraption holds its high heat for an hour's worth of cooking. When you've finished your CasusGrill dinner, you can either throw the unit in the trash, or throw it in your campfire. And then continue your eco-friendly efforts over at the cardboard Shit Box.

Oh, Poler Reversible Napsacks, you knew you had me at trippy colors and patterns of Rainier Beer. These camping and lounging companions certainly aren't the first wearable sleeping bags or blankets to take a seat at the...

Ready for some adventure, mate? The AM-V2 from Adventure Mate is a 5-in-1 multi-tool ready to help you chop up, shovel up, hook up, hammer down, and saw through the outdoors. But, like, in a nice way...

The stench of well-worn, oft-sweated-in shoes is frikkin' bananas, yet the smell itself is nothing like actual bananas. And for that matter, Boot Bananas don't smell like bananas either, they're just banana-looking deodorizers...

It wasn't deliberate, but turns out these 14 sustainable gift ideas aren't just eco-friendly products ready to be wrapped and presented to all the environmentally conscious cats on your Christmas list this year, many...