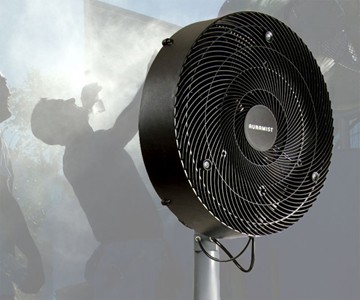 I recently got an email from a fan that said, "I hate to be HOT." Hahahaha, get it? A fan that hates to be hot. Actually, I just noticed that hilarious pun after I wrote it. I really did get an email from someone telling me she hates to be hot. I'm not sure if she wanted me to do something about it or was just taking the opportunity to vent to an anonymous person from the Internet who brings her daily joy in the form of witty, introspective, and informative writings on purchasable goods such as Iron Samurai watches and Fundies the underwear built for two but if it's the first one, I might be able to help.

This 18" Auramist cooling fan, called the Milo, sprays a continuous curtain of H2O beads so ultrafine they land dry to the touch, but, in conjunction with the fan blades' air circulation abilities, can reduce surrounding temperatures by up to 30 degrees F. Even better, the Milo requires no hose connection so it's completely portable. The on-board reservoir holds nearly 3 gallons of water (or Bud Light Lime if you want to cool off and relax. And be kissed all over the face by the magical nectar of fairies and unicorns) whose controlled output can last up to 5-1/2 hours.

Heatbit says it's a space heater that also...mines Bitcoin. That is, it warms up to 500 square feet of interior space, while it...generates cryptocurrency. For you to spend. Presumably on the electric bill you'll get...

Now I wouldn't call myself an Incense Dude - I'm more of a Rug Dude, obviously - but I am digging this Pumpkin Backflow Incense Burner as a gift for Halloween. It's countertop-sized, so much more subtle than the <a...

It's a scorching summer day. You're lounging on the patio. Jamming to some tunes. Sipping a cold brew. Gazing at the lawn. But something's missing. What's missing?...

Not that Dyson hasn't proven that fans don't need to look like a duck and walk like a duck to be a duck, but the Exhale bladeless fan is still the strangest looking thing I've ever seen mounted to a ceiling. I don't even...

14 Ways to Turn an Interior Room Into an Outdoor Oasis

Winter weather. Pandemic. High-rise urban apartment building. Housing shortage. Correction, affordable housing shortage. These are just a few of the reasons I decided to brainstorm some ways to turn an interior room into...