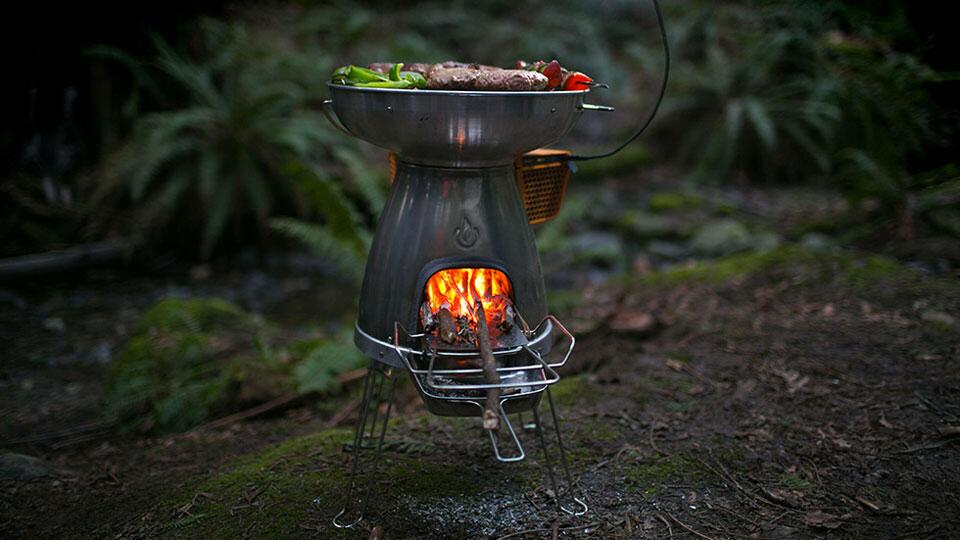 The BioLite Base Camp Stove uses wood both to power and make power. It will massage fruits of the forest into fuel for grilling hot dogs and charging smartphones. Similar to BioLite's original leaf-and-twig-powered Camp Stove, the Base Camp Stove converts wood to juice for human bodies and USB-charged devices alike. Its off-grid, fossil-fuel-free firing design accepts fallen branches and small pieces of firewood and, unlike its smaller predecessor, is ideal for group use.

BioLite doesn't burn bigger or hotter or longer than other fires, but it does burn smarter. The Base Camp can turn minimal amounts of wood into a viable source of heat for multi-belly cooking, with a grill surface accommodating up to 8 burgers or, by my estimation, about 57 Lil Smokies. In addition, as Base Camp wood burns it activates BioLite's electrical cogeneration technology. A thermoelectric generator in the assembly's orange power pack converts heat from the fire into about 5W of usable electricity output via a connected 5V USB port. That's enough to charge most everyday devices, including smartphones, GPS systems, headlamps, digital cameras, and tablets. The stove's power pack also has a battery, so users can either charge in conjunction with cooking or at a later time without the live fire.

The BioLite Base Camp Stove earned funding from a wildly successful Kickstarter campaign, which concluded June 15, 2014.

Muchas danke to James G. for the Dude Product Tip.

Big may be beautiful, but when it comes to RIFT Carbon Campers, under 500 pounds is lookin' pretty good too. Thanks to a carbon fiber shell over a powder-coated aluminum frame, and a 61-pound tongue weight, the RIFT Utility...

How has a house-shaped inflatable tent like AirArchitecture not been the most popular camping shelter for years now? It makes every other tent look like only the measly roof got plopped on the ground. And even Heimplanet's...

What a piece of junk! Actually, I have no idea how well this Star Wars Millennium Falcon Wireless Charge Pad works, or how cool (or junky) it looks in person, but that felt like the right line from the film series to...

I'm summer lovin' these 13 cool summer products in black, and not a-one of them is named Danny Zuko. (And I still say Sandy deserved better. Ladies, you shouldn't have to change yourself into a skin-tight-leather clad...