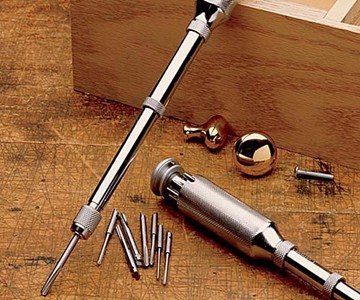 The Yankee Push Drill does not plug into the wall, which means its successful use is dependent entirely upon the well-oiled machine that is its handler's body. I bet my right arm and shoulder would be sore for 3 days if I used it to drill one hole in a wall stud. My right calf too. It's very sensitive.

Stanley made and sold Yankee Push Drills for decades until 2004, at which point they suddenly stopped. Coincidentally...or maybe not so coincidentally...2004 is the same year the film Saw came out. Now, 9 years later, just when it finally appears that the Saw franchise has been run into the ground, Yankee Push Drills have magically returned. Albeit this time as a custom-made release for Garrett Wade.

Each chrome-plated, solid brass drill includes 8 bits ranging from 1/16" to 11/64" neatly stored in the top of its handle. Once a bit is inserted, users push down on the top of the handle to rotate it clockwise and begin cutting the hole. With each push release, the handle returns to its starting position and the bit self-clears in the opposite direction. The dandy push drill can make holes up to 1-1/2" deep.

Shine bright like a...piece of Patagonian virapita wearing this titanium band engagement ring topped with a radiant-cut piece of wood. A good 3 carats from the looks of it...

Who needs iron for a throne when you have 6 billion wood pallets wandering the world waiting to be recycled? True, Anton Brunberg's "Pallet Thief" wood throne wouldn't make it past a single sneeze from Drogon - or even...

Are you a dreamer or a DOER? Monkey see monkey DOER. Just DOER it. Hey, this day is shaping up to be a lot more pun than I thought it would. Even better, the DOER compact tool shed is actually a cool product - a dozen...