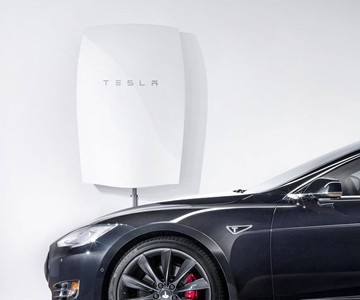 Basically if I could be anyone else on earth, living or dead*, I would be Elon Musk of Tesla Motors (and SpaceX). He's incredibly rich, he's had 2 hot wives (#1, #2), he's an undeniable genius, and...and!...he's not even evil. In fact, unless he's conducting the most elaborate ploy in history, I would argue that Musk's primary goal in life is to make the world a better place. Case in point: In 2008, even with a $180 million payout from Pay Pal, he more or less bankrupted himself pouring money into (at that time) failing Tesla and SpaceX projects. And then he, to put it mildly, un-bankrupted himself, and brought us things like near-perfect electric cars and private rocket ships that can go to space for a fraction of the cost of NASA's. If any dude is The Man, Elon Musk is The Man. And what The Man has for us now is the Tesla Powerwall.

The Powerwall is a big rechargeable lithium-ion battery that mounts in the home. It fills up throughout the day using electricity generated either from solar panels or from standard utility sources when rates are low, and then powers your entire home on its own in the evening. The intent is both to save money and, maybe even more desirably, cover homes during power outages since the Powerwall also serves as a backup electricity supply. Automated and compact, Tesla says the device is simple to install (say, on the wall in your garage next to a slightly larger and wheeled piece of automated Tesla equipment) and requires no maintenance during use.

With deliveries beginning Summer 2015, Powerwall is available in 2 models: 10kWh, optimized for backup applications; and 7kWh, optimized for daily use applications. Both can be connected with solar or grid and both can provide backup power. The panels can also be aligned and combined for additional energy storage. Each measures 51" high x 34" wide x 7" deep.

*Notice I did not say real or fictional; obviously if we were opening the arena to fictional characters I would be Iron Man or Batman, also both extremely rich visionaries out to save the world, but in costume.

Sold Out The Boring Company »

I don't know if a 50,000-volt Tesla coil is powerful enough to play a tag team rendition of "Sweet Home Alabama" like the pair in the above video, but it does radiate enough high-frequency energy to light 2 fluorescent...