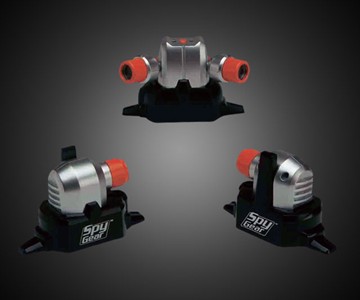 If you just want people to keep the F out, get an Add-a-Lock. But if you want them to believe for a split second that they have successfully encroached your space, only to disrupt the blaze of an invisble light that in turn sounds the alarm that in turn activates the green slime bucket release that in turn wakes up your pet guard tiger, Richard Parker, then by all means opt in on Spy Gear's Lazer Tripwire.

Lazer Tripwire (don't you dig how they replace the "s" in laser with a far more takes-no-shit-sounding "z"?) consists of 2 transmitter units and a receiver, whose individual capabilities synergize to emit a perimeter of protective, invisible laser beams. If the light is broken at any point by an intruder or, more likely, my mama bringing in folded laundry to put away during my mid-afternoon nap, alarms will sound, waking me up bolt upright. And rendering me very disgruntled at the disturbance. I said no entry before 5 pm, Mama!

Protected By F Around and Find Out Home Security Sign

I'm not sure if this Protected By F Around and Find Out Home Security Sign will prevent thieves from breaking into your house, or encourage them to do it. I mean, some people just can't pass up a challenge. And others...

If you're thinking this Invisibeam Field Disturbance Sensor for Vehicles is some real James Bond shit right here, you're...a little off. Despite its formidable, spy-worthy name, the Invisibeam Sensor is sort of just another...