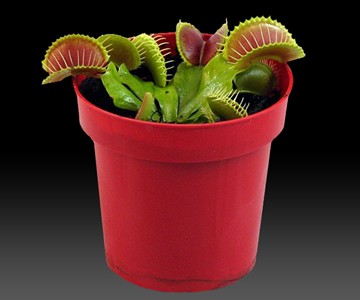 Despite the ominous reputation it's earned by way of musical theater and Rick Moranis (hey, two completely relevant references to Rick Moranis in a week!) the Venus flytrap is a pretty lame carnivore. Kind of like girls who take one bite of a slider and say that they're full or have a tummy ache or ohmygod are a vegetarian and haven't eaten meat in 10 years and how could you not tell them it was made of animal pulp and not black beans?! Venus flytraps eat bugs only. No beef. No bacon. No sushi. Still, they're way cooler than ferns.

The plant's "traps", bright red- and pink-colored basins with toothy-looking follicles, serve both to lure prey in and lock it inside once an ant, spider, beetle, grasshopper, or fly takes the bait. Semi-Interesting Bit of Horticultural Geekery Alert! Despite its name, the Venus flytrap's diet consists of very few flies. According to Wikipedia, the plant enjoys winged insects for only 5% of its meals. Weird. But it's probably kind of like how everyone calls my friend Gus The Pink Taco Eater even though his girlfriend says he really doesn't eat pink tacos very often. Some names just stick.

This potted Venus flytrap arrives in a 3" container with basic care instructions. Hailing from South Carolina and southern portions of North Carolina, the plants like humidity, and should be kept in an environment that can maintain it at 50% to 60%.

MONITREE isn't really a money tree, but if you're of the mind that plants make your life richer, these living computer monitor vines should indeed increase your emotional net worth...

Nothing says Happy Mother's Day like a bouquet of sticky flowers caked with dead fruit flies and fungus gnats! ... And I'm only sorta kidding about that, especially if you need a gift for a mom who's also an avid gardener...

"A self-contained, low maintenance REEF that will light up any desk with brightly colored coral." So goes the blurb on PJ Reefs' desktop-sized saltwater aquarium. I have to say, mine eyes are digging the brightly colored...

After raising nearly half a million dollars on Kickstarter, the Glowing Plants project is accepting pre-orders and synthetic biology-ing away to deliver their natural sources of light in Fall 2014. Make no mistake, Glowing...

When I hear the name "Willy the Worm," and think of what Willy the Worm might be used for, "water sensor for houseplants" isn't the first thing that comes to mind. Or the second. Those would be: 1) a tool to help you...