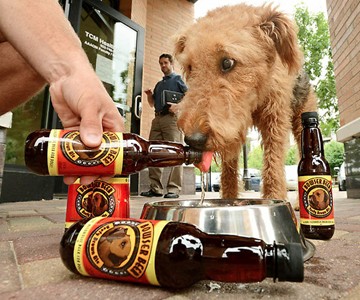 Sold Out from Bowser Beer »
Check It Out

Dogs. Always wanting to do everything their humans do. Drink beer. Hog the bed. Hump ladies' legs. And while they've mastered the latter two, minus the times a drunk guest sneaks them a few swigs during holiday parties, dogs miss out on the indulgent pleasures of knocking back a cold one. Or they did. On behalf of all the labs, shepherds, spaniels, doodles, and shithead pugs of the world, I would like to say, "Thank you, Bowser Beer."

Though really no more than beef or chicken broth in a bottle, Bowser Beer revolutionizes the concept of canine partying. Imagine how much more fun your pooch is going to have participating in pissing contests with the rest of the neighborhood dogs with a bottle neck in his mouth and a 6-pack of brew in his bladder. Available in Original Beef and Cock-a-Doodle-Brew Chicken, Bowser beer contains USDA-approved meat juices, B-vitamin-rich malt barley, and glucosamine. Glucosamine for joint health. So, like you and your "antioxidant-rich" red wine and chocolate, your dog can convince himself his vices are actually good for him too.

What Bowser Beer does not contain is alcohol and carbonation. Yep, the two components that define beer as beer. But that's probably for the best. I mean, who wants to be stuck carrying a 150-pound Mastiff ripping digested-chicken-scented farts to bed when he's too wasted to walk on his own and keeps trying to mount the Maltese from down the street?

Bowser Beer is sold by the 6-pack, and can be enjoyed straight out of the bottle, mixed with dry kibble, used to "season" water in the doggie bowl, or poured over crushed ice for a crunchy, paw-lickin' treat. After your dog earns it doing this, of course.

Ashleigh Davies designed the Doze, a combo dog bed and side table (with removable lap desk!) in response to the prompt to create "a multifunctional piece of furniture to help reduce stress for dogs with separation anxiety...

As joyful as it is to watch a dog try to get its jaws around a fully inflated soccer ball, and end up rolling and falling all over it in the process, this soccer ball made with grab tabs especially for pooch play is a...

That's it, Petvation, it was one thing when the government was coming for me with their facial recognition technology, but my cat is where I draw the line! Leave Zanzibar out of this! ... Though, I mean, an automatic...

Now doesn't the Aquapaw Dog Bath Brush look like a bathtime apparatus that will make your dog...hate baths exactly as much as they did before. But at least your involvement in the process will be easier, faster, and consume...

Don't worry, dog owners. Dog Grass isn't that kind of grass for dogs. It's not even the Dad Grass hemp CBD kind of grass. And it isn't a cutesy kit with a dog theme for growing your own weed. Dare I say, at least for...