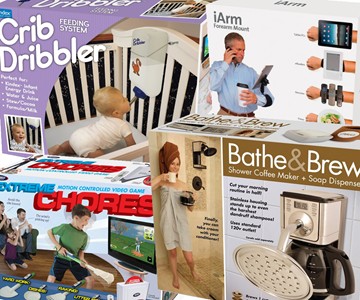 Liven up the holidays--at least for yourself--with Prank Packs, fake gift boxes with intricately detailed photos and explanations of products just bizarre enough to be ridiculous, but just believable enough in enterprising 21st century America that their dumfounded recipients will trip over confused expressions and polite thank yous. While silently sulking that they're not even going to be able to sell a Crib Dribbler hamster-like mounted water bottle for human babies, or a Motorized Rolling Pin on Craig's List. Revel in the temporary dejection of a child who thought he was getting Assassin's Creed, but instead unwraps an Extreme Chores game for the Wii, and flip the bird to (or gain major cube cred at) stupid intraoffice white elephant parties with the Bathe & Brew, a shower-head-mounted coffee maker.

Make no mistake, ye excited about purchasing an alarm clock-griddle combo or a mechanical arm that will pet your cat for you, Prank Packs are empty boxes intended to be filled with a legit gift that will turn the half-hearted enthusiasm your girlfriend initially exhibits when she unwraps it into an exponentially greater spectacle of freaking out once she realizes that not only did she receive the mystical dragon wraparound earring she's been blatantly hinting she wants, but she also doesn't have to wear this pair of dumb F-ing Toe Tunes slippers speakers every time you come over.

All Prank Packs measure 11-1/4" x 9" x 3-1/4" and painted in 6 sides of real graphics and satirical text. I imagine them not only as the gifts that will make the frantic tornado of unwrapping presents last 2.7 minutes longer for my family this year, but also as the gifts that will be passed around to pay the gaggster fun forward for years to come.

Why would you buy gifts for people you don't like much? Because they're family, and you have to. Or, though they're not really a friend, they're part of your friend group, and they're having a birthday party, and you...