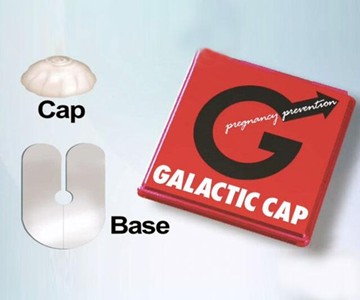 Charles Powell created the Galactic Cap in response to the call for a male contraceptive that males won't bitch about or, in some cases, refuse to wear. While not perfect--the Cap's tip-only coverage cannot protect against certain STIs, such as HPV--the Cap does claim to address 4 primary condom shortfalls:

The 2-part Galactic Cap system includes an adhesive base, which can be applied well in advance of sexy time. Not that this sounds particularly appealing, but days early even, as you can shower and pee and go about your normal non-penetration business with the base in place. The second Galactic Cap component, the cap, attaches to the base with a different high-tech adhesive, and creates a tight seal when scoring is imminent. Together, the parts still only cover the very tip of the penis, rather than the full shaft.

Galactic Caps run as an Indiegogo campaign through July 1, 2014. While most backer pledges will go towards further development and getting the FDA to say, "Aye, Aye" to Captain Galactic, those especially eager to try out a prototype can slide a sample on around December 2014 for a $100 pledge. If all goes well, Powell anticipates his Galactic Caps will descend as a full-on contraceptive army around January 2017.

Not only does the term "caulk condom" create a tee-hee-hee double entendre, but these caulk-saving caps also look like little sperms when unrolled. What a great reminder gift for men to protect both their open caulk so...

Nothing tells your date, I was pretty sure I'd get lucky tonight, like a sexy pair of boxer briefs. With a built-in condom pocket. Hidden with great metaphor behind a lifesaver stitched to the right thigh. Ah, the only...

Though noble, I was very surprised to learn that One-Handed Condom Wrapper dreamer upper and designer Ben Pawle developed his concept (yes, sadly just a concept at this point, though now that it's