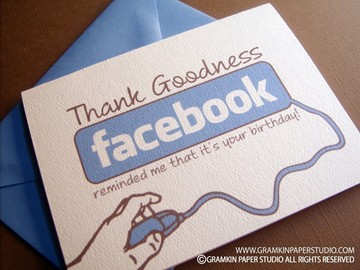 This is one of those "It's funny 'cause it's true" jokes, isn't it? However, there are two inherent problems with its marketability. 1) Any sender who would get the joke would never take the time to obtain a mailing address, purchase a stamp, and physically place a greeting card in a mailbox when s/he can simply type "Happy Birthday!!!!!!!!" on the would-be recipient's Wall. 2) Any recipient who would get the joke would never actually get the card anyway because s/he hasn't bothered to check the non-electronic mailbox since March. But, hey, it's about time Facebook made the leap from the internet to the printed word--if it's going to achieve world domination, followed shortly thereafter by international scorn, and, ultimately, descent into oblivion, it can't limit itself to a single medium. That's why J.Lo became a singer, Taylor Swift made a perfume, and Robert Pattinson will soon endorse a line of Edward Cullen blow-up dolls.

Cake Pops, you're out. Cake Push Pops...Get! In! Mah! Belly! I'm not even a rainbows 'n' sprinkles kind of dude, but these stacked, spongy Roy G Biv treats from Flour Shop are making me all Veruca Salt levels of covetous...

The Best Prank Birthday Card Ever

Now my favorite birthday gifts come in the form of a Peeping Creeper at the bedroom window or talking an amateur heavyweight UFC fighter into accusing my friend Cornelius of sleeping with his girlfriend, but if you're...

The Giant Oreo Cookie Cake Mold is even pink. So there's pretty much no question I should give it to my wife, She-Ra: Princess of Power, as a Valentine's Day gift. And then invite her to use it to bake me a Giant Oreo...

With Gift Wrap My Face personalized gift wrap on the outside, there's really no need to give them anything but an empty box on the inside*. It's the same idea as The medium is the message: the present is the presentation...

The Cybertecture Mirror allows us to gaze simultaneously upon the two things we like gazing upon best: the Internet and ourselves. A glass reflection of both beatific mugs, and streaming Web content, the futuristic mirror...

If you thought you liked doughy pizza before, just wait 'til someone sends you a pepperoni pie made entirely of cash. This pizza is money!...