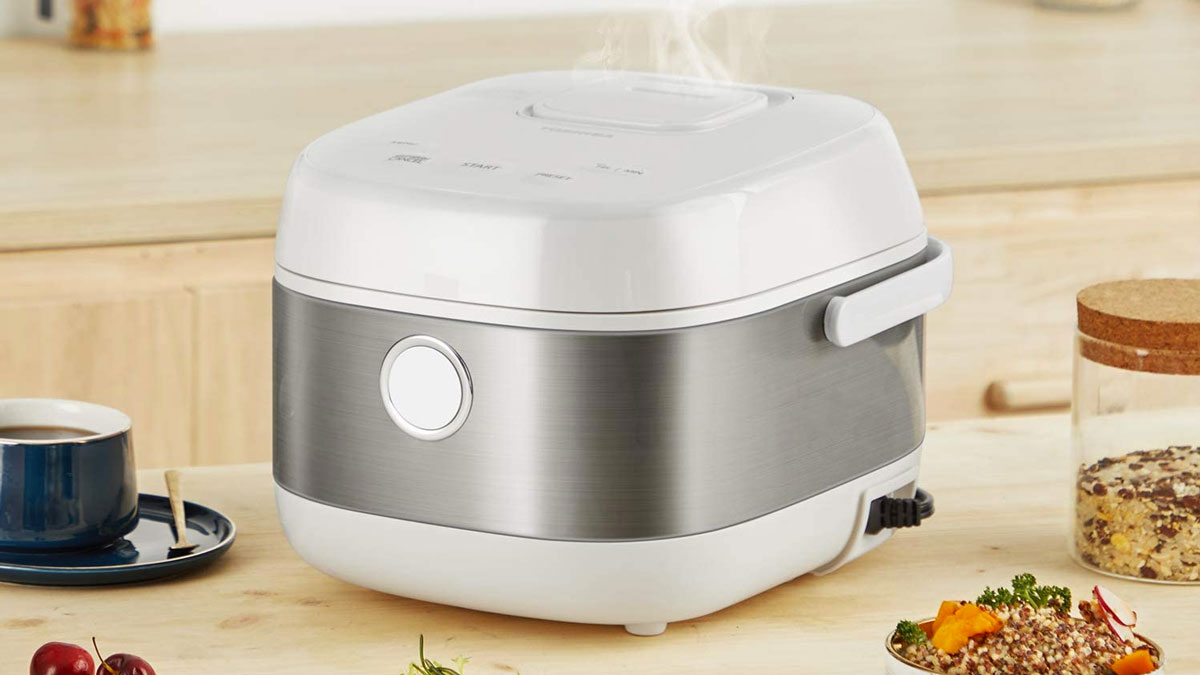 But it's no joke, my dudes. The Toshiba Low Carb Rice Cooker is actually more science than snake oil - and simple science too. Toshiba has added a stainless steel basket to their digital kitchen gadget to catch and store "unhealthy digestive starch" from rice as it cooks. Toshiba says up to 37% of this starch will be filtered out of the rice, leaving behind a "rice soup" in the basket (which they also point out will essentially be rice sugar water, so you probably shouldn't drink it, unless you're specifically in the market for a glass of rice sugar water.)

At the same time it's extracting unhealthy starches from rice, the Low Carb Rice Cooker is somehow increasing healthy resistant starch by up to 34%. Toshiba mentions these facts and figures have been tested by the world's leading CVC verification, but I have no idea what CVC verification is except for approval of the 3 numbers on the back of my credit card for online purchases.

In addition to cooking carb-friendlier rice, the Low Carb Rice Cooker can also function as a slow cooker, steamer, and food warmer. It comes with 8 pre-programmed settings for various grains, and uses smart fuzzy logic and induction heating to make a perfect pot of starchy-but-slightly-less-so gold every time you use it.

It's nearly impossible to cook rice on the stovetop like I get when I order it from Thai One On. And I'm not saying Sistema's Microwave Rice Cooker is going to be able to replicate Asian takeout quality exactly (though...

People always talk about sushi making as this formidable, elusive craft that many have tried, but all but the most elite and Jiro-Ono-blessed have failed to execute well. And while I basically agree with this assessment...

I know even some of the cheapest sushi joints serve their spicy tuna and krab rolls out of a sushi boat, but it always makes me feel so Most Interesting Man in the World to dip my chopsticks into a majestic ship to pull...

Usually when I spend $84.99 on a snack, I want it to be one that is devoid of nutritional value. Gluten-free, of course. And highly unsatisfying. Bonus points if I can temporarily store my iPhone in it. Well hello there...