The Snacking Dead: A Parody in a Cookbook 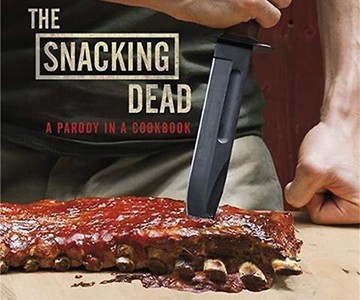 I'm not sure whose poor planning skills decided The Snacking Dead: A Parody in a Cookbook should be released after the October 13th Season 4 opener of The Walking Dead, thus eliminating all of its potential profits from themed premiere parties, but whatever. I don't get a cut regardless of when the guide to meal zombification comes out, so I guess the only reason I mention it at all is that I like to bitch and point out others' stupidity and be a general curmudgeon. Just like everyone else on the Internet.

The Snacking Dead stitches together recipes, tips for turning out a terrific meal even when Zompoc is imminent, and "a love story that will send ripples down your spine." Yeah, a big WTF? from me on that last bit too. Some of the recipes apply the cookbook's stated parody to their dishes' names, such as Sweetish Fleshballs, Crawldaddy Etouffe Toasts, and Gratuitous Violence Jello Mold (awesome!), while others attack the dishes' execution. Like that photograph of a calzone oozing blue cheese in a way reminiscent enough of pus and bile that it makes me never want to eat a calzone again. Damn you, zombies and zombie pop culture fanatics! Sniff. Cheese-and-meat-stuffed bread used to be my favorite method of carbo-loading!

You can't buy either of these, but Classified Moto might let you commission your own. The dudes behind this custom bike company collaborated with the dudes behind The Walking Dead to construct a pair of identical motorcycles...

I don't know what's so Walking Dead about this one-man 72-hour survival kit, except that it's "officially licensed" and says, "AMC The Walking Dead" on its messenger bag content carrier. Maybe Darryl and Rick bled on...

Can you pull off Alice wielding a Mossberg 590 and lighting up super zombie scum in a post-apocalyptic Vegas wasteland? I definitely can...do no such thing. In terms of badass combative chicks, I could maybe pass as Jean...

Foodheim: A Culinary Adventure author Eric Wareheim is an actor, director, winemaker, and foodie. But you might know him best as Arnold, Dev's giant "token white friend" in Master of None, who develops a fondness for...

I don't know if Modernist Pizza will end up being the definitive guide to cooking, eating, finding the best, and dreaming nightly about pizza, but it's sure got research, travel, science, pedigree, and 1,708 pages on...