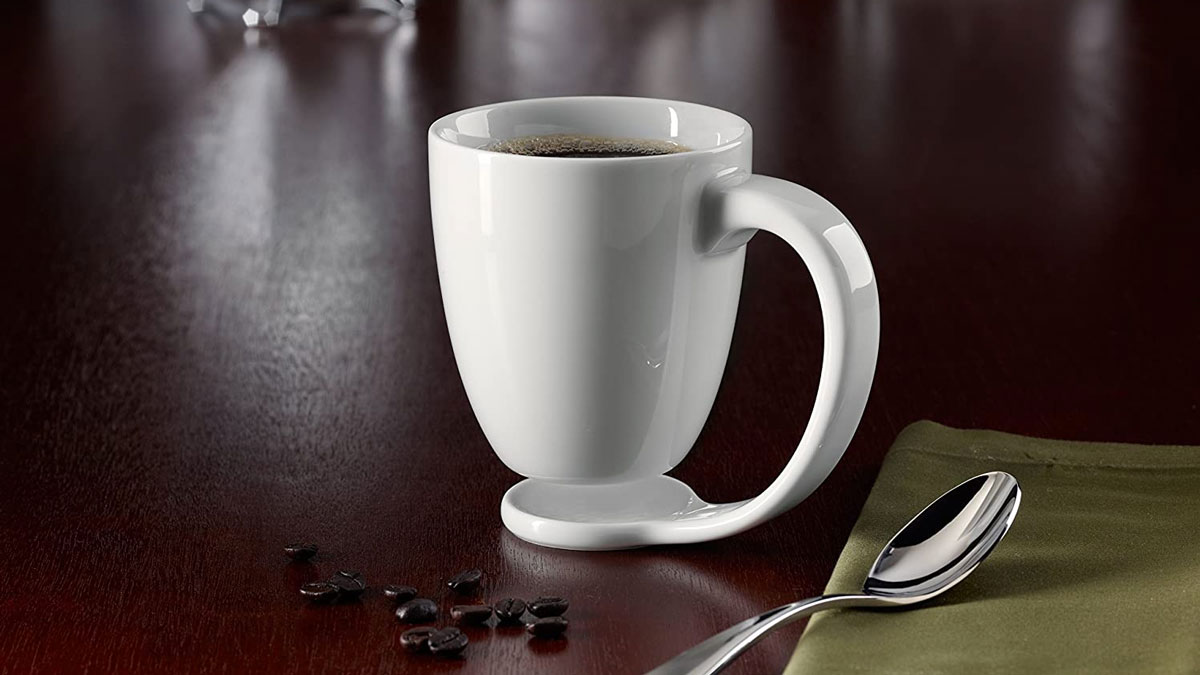 One biting comment I could make about Tigere Chiriga's Floating Mug is...hmmm...donut hole. I got nothin'. It's just a simple, yet truly novel design, whose purpose is as terrifically useful as its look is incredibly cool. Chiriga invented the Floating Mug for two reasons: 1) he loves tea; and 2) he wanted to get his wife off his ass.

Condensation rings from ever-present cups and mugs left on the couple's new furniture were creating some domestic discontent, and although Chiriga had seen many mugs designed with built-in coasters of sorts, he felt most took away the tactile pleasure of holding a warm porcelain cup in his hands, or were uglier than the east end of a horse headed west. His Eureka moment came when grabbing a suspended banana off its holder. See, hovering bananas...hovering mugs...aaand the Floating Mug is born.

In case you were wondering, mugs' structural integrity was not compromised by this new design. They will still support the weight of the gallons of milk most of us like to rest on top of our morning coffee.

The Floating Mug will run as a Kickstarter project through July 31, 2012, and has already achieved its $15,000 funding goal. While Chiriga had his prototype made in China, he has a US manufacturer on deck to manage its full production run. This explains the mug's $40 price tag ($75 for two), as things be more expensive to make in America. Anticipated ship date is December 2012, in time for Christmas. Thinking about Christmas in July kind of makes me want to vomit, but admittedly, a Floating Mug would be a pretty sweet gift for fans of coffee, tea, and suspended animation.

November 2013 Update: The Floating Mug exceeded its crowdfunding goal and is now available for direct purchase--follow the link below.

Practice your nip grip with a Titty Tumbler from Jasmine Pots. And if you can really take hold of a golden nipple, and drink from its ceramic cup without fully cupping it, then you're ready for some next-level grabbing...

Drink your beer on the down Lolo with this lid of subterfuge. Disguised as a to-go coffee lid, the Lolo* fits over a can of beer, which then slides into most any large paper coffee cup to form a covert koozie. Sneaky...

The Beach Glass impales both sand and water with good spirits. A series of spike-bottomed drinkware for wine, beer, cocktails, mocktails, and plain ol' sodies, Beach Glasses are designed to dig into the sand and turn...

The Covert Coffee concealment insert is a head-scratcher. So it's a jar, non-buoyant and water-tight, that you can fill with your small valuables, seal up, and hide away from prying eyes. Inside your to-go cup of coffee...

The Stone Cup is kind of the cellar of drinking vessels. Thanks to its composition of metamorphic rock born deep beneath the earth's surface, the cup has mad, and all-natural, insulating skills. Both for cold drinks...

Game of Thrones-inspired AleHorns give you at least one of the tools you'll need to drink like the head of a House of Westeros. Grab one of their 100% ethically-sourced bovine horn tankards and raise a glass to the perfect...

The effects of the weekend call for a thick shot of Death Wish Coffee and a long drag of a Marlboro Light. It's almost like Solo e Sola knows that my Saturday night culminated in the crushing of a raw egg in my right...

SIND Studio has a mug - the drinking kind and the face kind - for every expression you wear and emotion you feel before and after you've had your coffee. There's a groggy Yawning Mug (before coffee). A jubilant Laughing...