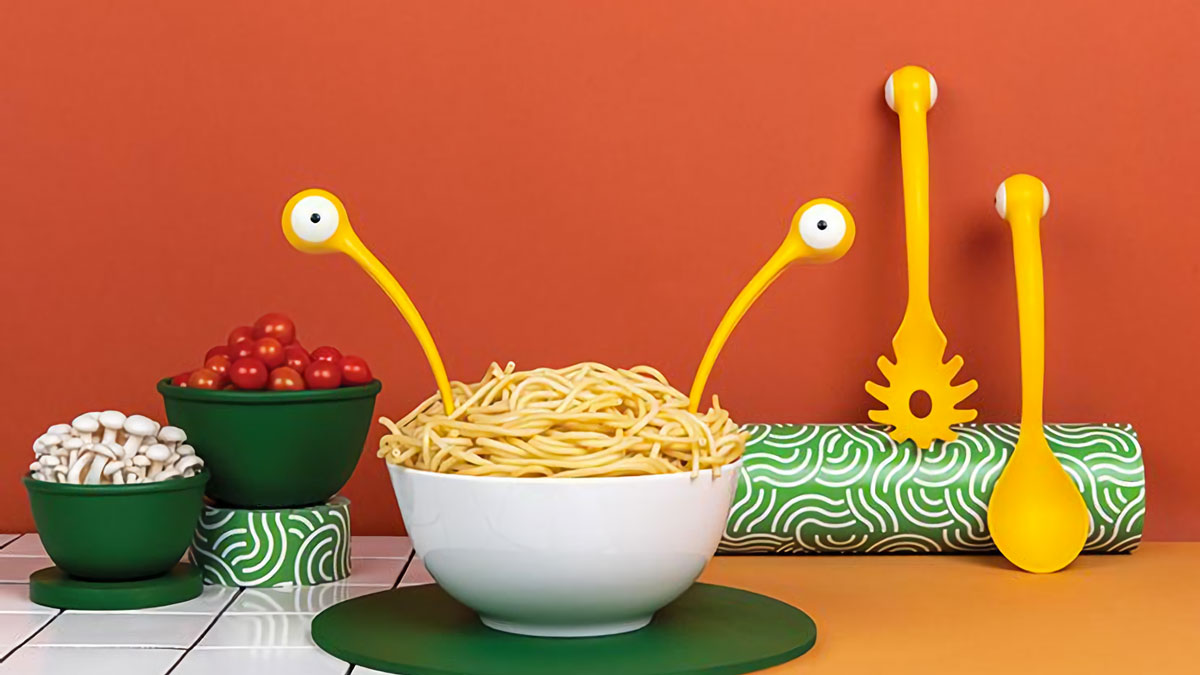 OTOTO's new Spaghetti Monster kitchen utensils are technically called pasta servers, but I think in being true to their inspiration, and honoring the FSM, their highest and best use at your next dinner party would be as pasta flingers. You know, the Flying Spaghetti Monster flying some spaghetti down the length of the table. There's a whole game of Dangerous Experiments for After Dinner out there, but why not get the hot noodles and sauce involved in the fun while everyone's eating?

The Spaghetti Monster Pasta Servers are a follow-up to OTOTO's Spaghetti Monster Colander. I'm surprised this set of spoon and straining spork didn't come first, though, seeing as the colander could be used from anything from canned beans to rinsed greens, but the servers are so obviously designed for big ol' vats of spaghetti.

Pastafarians, Flying Spaghetti Monster sympathizers, people who just enjoy a good googly-eyed car emblem, I hope you're hungry! For your deity has appeared to me in colander form. He says he wants to live in your kitchen...

Kraft Mac & Cheese that's dyed pink and flavored like candy. That's sweetened pink noodles and cheese sauce. So...is this Kraft limited edition supposed to be a Valentine's Day gift for someone you love or so

It's no Sears Tower* glass Skydeck hovering 1,353 feet above the streets of Chicago, but at least this transparent stock pot is a lot easier to haul home, and way less likely to make you vomit. Well...unless you're a...

Isn't half the fun of cooking making a ginormous mess? And then spending hours you could be eating your Beef & Fritos Enchiladas cleaning up the kitchen afterward? Hmmm...maybe not so much. One of the top culinary offenses...

No need to knead, noodle lovers. Or mix, feed, or crank for that matter. Just pour water, flour, egg...and whatever other edible Eastern magic creates the kinky deliciousness that is ramen...into the Philips Noodle Maker...