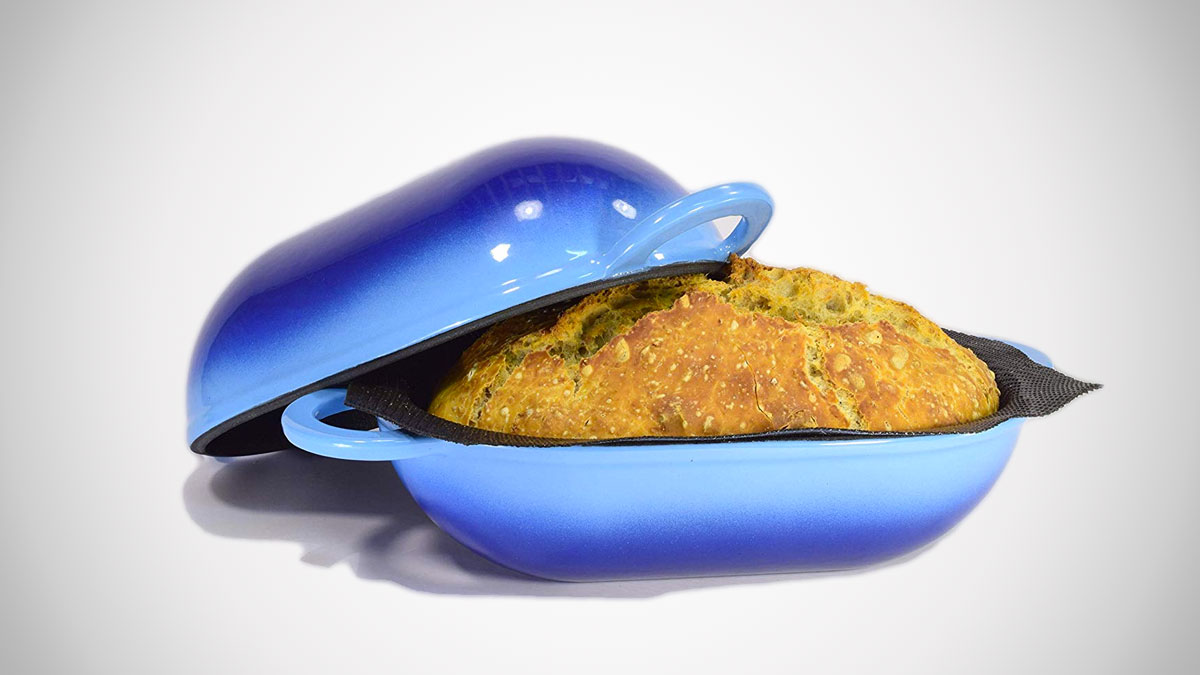 When LoafNest sent me one of their cast iron dutch ovens to test out its bread making skills (and the claim that it's the world's easiest artisan bread kit) I assumed my wife would be doing the baking. Not because she's my wife, and a woman, but because she's the one who enjoys turning ingredients into food, and is able to do more in the kitchen than heat up one of those steam-in-bag meals in the microwave.

But then she pointed out that if the whole essence of the LoafNest is that any idiot should be able to use it to bake delicious bread, I should be the idiot giving it a go.

It was a fair point.

So a few days ago, I baked my life's very first loaf of bread. And, to quote my irritating Aunt Jan, "I hate to toot my own horn, but it turned out preeeeetty darn good." Especially considering I did just about everything possible to F it up.

Some LoafNest background: the LoafNest kit consists of a 2-piece oval cast iron dome, with a removable silicone liner that sits inside the bottom piece. When baking bread the liner prevents your dough from sticking, and the dome injects it with 360-degree heat - dutch oven-style, but shaped like a loaf of bread.

The benefit of using the dutch oven and liner is that they do all the work for you, eliminating the need to knead, shape, and fuss with your bread dough to prep it. You preheat the LoafNest in the oven for at least 45 minutes, and then dump your risen dough into the liner to bake for another 45 or so.

Prior to that, you'll spend 5 minutes or less measuring out flour, water, salt, and yeast (for the basic recipe) and then about 18 hours sticking the dough in a corner and letting it rise. (Yes, I said it was a super easy process, not a super fast one.)

During my LoafNest trial run, here are a few things I did not do right:

Despite all of the above, and my status as a baking novice (fine, idiot) my bread turned out edible! It was a little dense and chewy, but She-Ra: Princess of Power had made a saucy pasta dish that night, and it sopped up the creamy tomato goodness like a yeasty, spongy, glutinous champ. And it looked beauteous. The non-professional images in the gallery above are my own.

I'm planning on LoafNesting up loaf #2 this weekend.

Obviously, this instant Sandwich Decruster & Sealer is made for kids. Spoiled kids. Kids who expect their parents to waste piles and piles of bread over the years so that they don't have to eat the icky crusts, or suffer...

Carbo-load your eyes on the LOAFA Sofa, a modular couch made entirely of bread rolls. OK, probably bread roll pillows, but seeing as the LOAFA is still a prototype, we'll have to see what IKEA decides about that when...

I'm still not even sure what the hell roti is. I thought Indian bread was either naan (mmmmm, chewy) or papadums (mmmmm, crunchy). What's this third formation of dough throwing a wrench into my narrow culinary view of...

I know store-bought tortillas aren't exactly a wallet vacuum, and making them yourself won't really save any money, but if Flatev's claims are to be trusted, this electric countertop tortilla churner requires 0 skills...