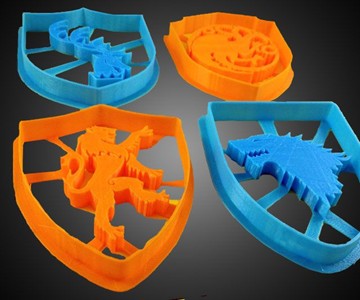 Honey-spiced locusts from A Feast of Ice and Fire's Essos chapter may be a more authentic dessert to serve at your next Game of Thrones viewing party, but...ew. That sounds disgusting. Aren't locusts bugs? People from Essos are so weird. I'm sticking with sugar cookies. In the shape of Tyrion Lannister's head. Bug munching: sick. Pretend cannibalism: awesome.

House Sigil cookie cutters, plus a special addition in the shape of America's favorite mop-topped little person*, transform limp amoebas of flour, sugar, and egg into emblems of valiance, gallantry, honor, integrity, and, in the case of the Stark family, repeated short-sightedness and poor decision-making skills. In fact, I'm kind of surprised that creator Athey Moravetz chose Tyrion as the character to turn into a disembodied cookie head. If you know what I mean.

Moravetz sells the Game of Thrones collection as individual cutters in Houses Lannister, Stark, Targaryen, Baratheon, Arryn, and Tully, or as a set of 4, without the Arryn falcon and Tully silver trout. Pieces are printed on a 3D Makerbot Replicator.

*When I was trying to think of products to run for April Fool's Day my friend Esteban suggested a midget tosser. Some sort of harnessed contraption that would improve throwers' leverage and trajectory in midget tossing competitions. He said it like hurling midgets is a real thing and I was very confused. So I did what I always do when people make statements that turn my wholesome sensibilities upside down and called my mom. First she asked if I was sure the entire conversation wasn't just a joke made at my expense, kind of like that time Esteban asked me if I rode the short bus to school and I said, "No, my mom always drove me to school, except for in 6th grade when I did ride the bus, but it was normal-sized." Anyway, my mom eventually suggested I just look up midget tossing on Wikipedia, so I did and guess what: it's real. But they call it dwarf tossing. And you don't just pick up the dwarves and throw them without permission. They volunteer and put on Velcro suits and competitors fling them against Velcro walls. Maybe I'd never heard of it before because legal actions have been take to officially ban the "bar attraction" in many parts of the United States, France, and Canada.

Global Grub is here to help adventurous cooks and the people who love to eat their masterpieces "explore new tastes and techniques in [the] kitchen." A great gift for foodies this holiday season, Global Grub DIY Food...

What can I say about the Tetris sandwich cutter except that it cuts sandwiches into shapes based on the all-time best of all games of all time? UNO can barely crawl out of its little paper carton in the presence of Tetris...