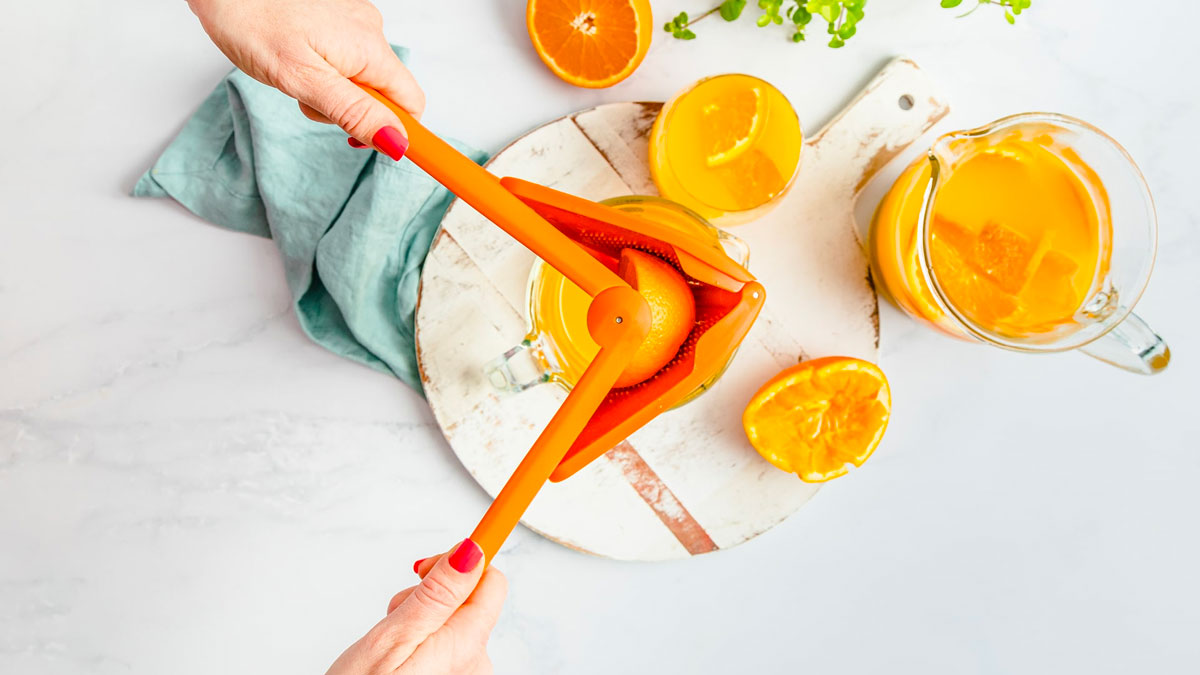 The Fluicer is one of the latest handy designs, and fanciful portmanteau words, from Dreamfarm. In this case the portmanteau stems the words "flat" and "juicer," and the handiness from a juicer that provides increased leverage and requires less force to squeeze, and then folds flat to fit nice and neat in your kitchen drawers when not in use.

The Fluicer has a sideways pivot operation that does require both of your hands for squeezing, but pays back the double-duty by allowing you to use arm instead of hand muscles, and therefore less effort to get your juice. The Fluicer also presses citrus sideways instead of squashing it downward, which generally requires less force from the administrator. A built-in seed catcher both prevents pips from following juice to its endpoint, and funnels the juice where you want it to go.

When you're finished juicing, the Fluicer's almost origami-style design allows it to collapse into a flat kitchen tool that won't add bulk or get caught in your drawers.

I hope the Breville 3X Bluicer is as fun to use as the word "Bluicer" is to say. Over and over again in my head, as if it's a whisper from the gods that I should name my firstborn Bluicer, or buy a blender and juicer...

Wait, wait, let me just juice a squeeze of lemon...with a uranium twist for that cocktail. No? What, you prefer lime?...

I am gonna ream your eyes out...lemons. And then I'm comin' for you, limes. The Knuckle Juicer is here to punch the acid out of all your ornery citrus...

It's an ergo-juicer. The Helix Citrus Juicer from Joseph Joseph gives the twist-action of your hand and wrist a big assist. Makes the process less awkward. Requires less strength, so you can work harder for longer...

HeadLimes, citrus squeezers you can clip onto your beverage bottle, glass, or plastic cup, seem like they could make a Top 20 list of the year's most unnecessary inventions. Is it really that hard to use your fingers...

My mama had an electric citrus juicer when I was growing up. Not a Tribest CitriStar Electric Citrus Juicer, but whatever two-tone brown version of one of the pulp grinding machines existed in the 90s. Every year some...

When life gives you lemons, squeeze those bad boys into your Citrus Zinger Water Bottle for enhanced flavor and hydration. Life can throw out limes and clementines with reckless abandon too, and you'll have a spot for...

Don't just juice your lemons, Lemoniere them with this watering can lemon juicer. 9 out of 10 horticulturists prefer it to electric juicers, reamers, and other citrus extraction tools...

And you thought getting the occasional squirt of lime in the eye from your friend Cornelius' Corona was bad. Juice Bruce spends his entire useful life getting doused in the acid of citrus fruits. All in the name of serving...