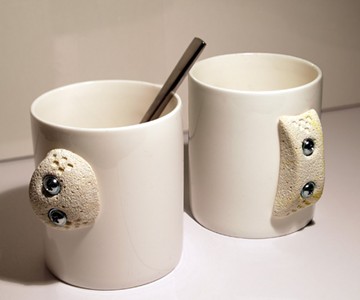 The Cliff Hanger Mug replaces traditional coffee mug handles with the synthetic boulders rock climbers use for indoor honing of finger strength. Not to state the obvious, but, that's funny. And apropos. Because coffee drinking, rock climbing, they're both fitfully precarious endeavors. For example, when rock climbing, the following tragedies can strike:

And when drinking coffee:

Yep. Rock climbing and coffee drinking: two highways to the danger zone, now joined together into a Meta statement of adventure and hardness of core. Do you dare drink from the Cliff Hanger?

How about while wearing a white shirt?

And typing on a brand new MacBook?

With your new girlfriend's Louis Vuitton purse in your lap?

And her 6-month old Maltese's head sticking out of the purse?

Question for Beyonce: if you like it, is it OK to just put a Ring Mug on it? Yeah...I didn't think so...

The Octopus Mug Holder has a mug-holding leg for each mug of coffee I will be drinking this morning. Why do I need a different mug for every cup of coffee? Well, my wife says I'm a big fan of Teenager Pro Tips, and the...

As purdy as Nova Ceramics' Travel Mugs are, lookin' all like the ocean surf in all the colors of the rainbow, one thing my household does not need is another mug, ceramic, travel, double-wall insulated, lidded, unlidded...

Wait, I have to do all the work myself, and you cost how much, Minimal Precision Hand Coffee Grinder? I feel a hand cramp and some buyer's remorse coming on...