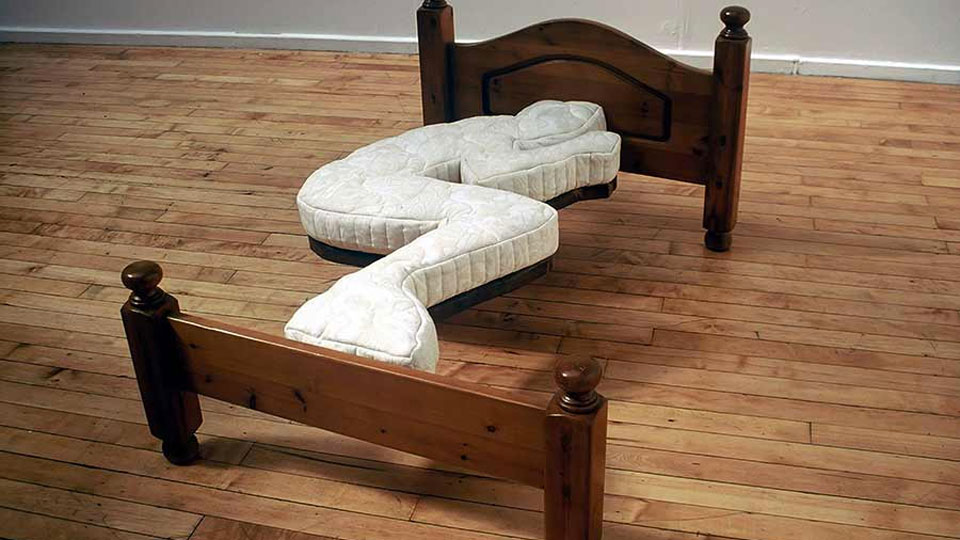 I'd say, "Poor bastard," but dying in bed, curled up all cozy, sleeping in the fetal position, isn't the worst way to go. Though I guess they don't usually go to the trouble of drawing chalk outlines of the newly deceased unless there's some monkey business involved. Maybe this dude was poisoned. Or given a hallucinogenic drug that made him dream that he died, and then, as then urban legend goes, he really died. We may never know.

But thanks to Dominic Wilcox we will always know what he looked like when he went, and can have the image preserved in the form of a chalk outline-style mattress that we too can curl up on in the dead dude's exact side-sleeping position to pay him tribute / fulfill a morbid curiosity.

Also thanks to Dominic Wilcox, I just made all of that up based on what flashed through my head when I first saw this bed, which Wilcox did not name the "Die in Your Sleep Bed," but simply "Bed." Wilcox creates "thought provoking and surprising objects," and this was one of the first he made that wasn't a flat, 2D work. The mattress is an outline of his own body and would, theoretically, be the perfect size for the artist when he's sleeping solo.

Provided he sleeps like the dead, or, uh, dies in his sleep.

The MattressJack is sold as an inflatable mattress lifter - or elevator, if you prefer that branding - that makes making the bed easier for the elderly and people with chronic pain. But what about me? And you? We dudes...