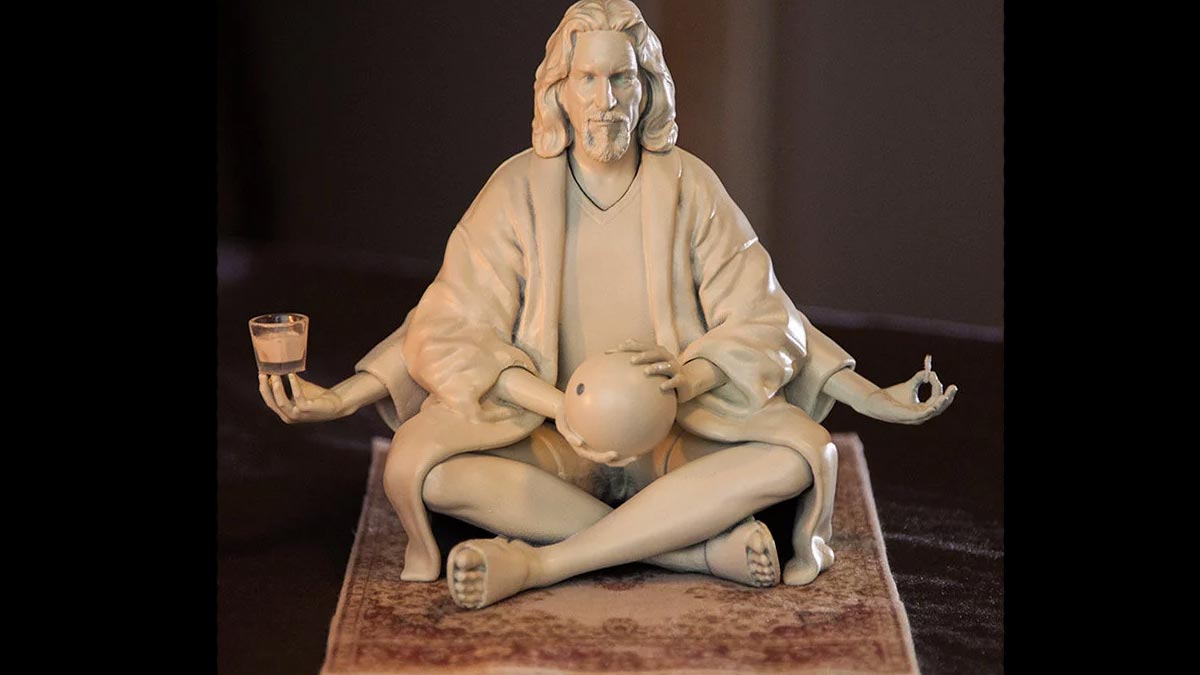 Logan of Dappled Light Studio will ship The Dude to you in 10 or so pieces - wonder if he'd consider that more or less not cool than peeing on his rug - which you'll need to affix to form the ultimate Dude Abiding. And by ultimate I mean The Dude sitting in lotus pose, on his rug, with 4 Hindu-god-style arms. Two holding his bowling ball Jesus is going to F him in the A with, one holding a tasty White Russian, and the last finger-thumbing a fat joint.

The included custom printed Persian rug arrives with no visible pee stains. But I'm sure with a couple dots of yellow food coloring you could authenticate it in no time.

The Dude Abiding Kit is a 1:6 scale urethane resin model that, in addition to assembly, will require some minor seam line cleanup prior to finishing and adding to your Lebowski shrine.

Lebowski fans who might prefer a more functional tribute to the film can also check out The Dude's Rug Cutting Board.

While I appreciate the idea of this Dude Abides Ugly Christmas Sweater, I think it missed its chance of truly abiding by not making the background a Persian rug motif. Bowling balls and pins are nice and Lebowski affiliated...

Exclusive. It's an excluding word only if you're not invited to be a part of it. And we're welcoming all Dude readers to the launch of Dude Exclusives, an online store of discounted Dudeworthy products. Some you will...

The Dude abides. And The Dude imbibes. To fans of The Big Lebowski, fans of White Russians, fans of bowling, and fans of portable bars, Etsy vendor Vanessa Nystrom presents The White Russian Bag, a functional homage to...