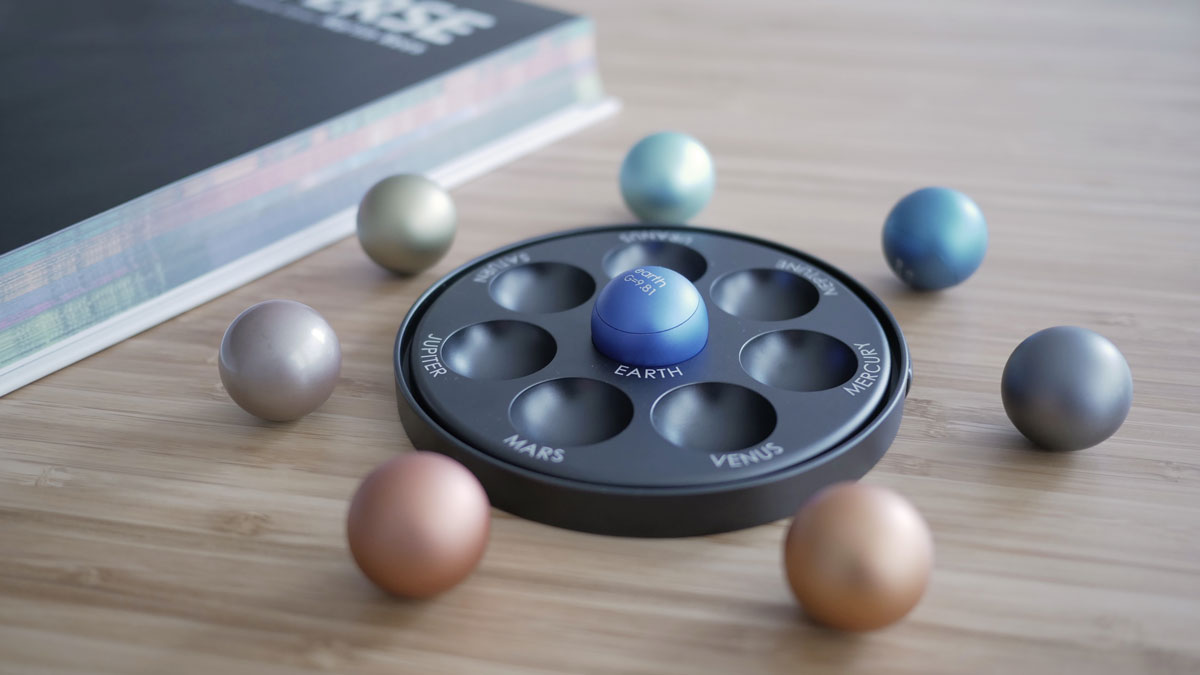 $95
from Kickstarter »
Check It Out

The Gravity Museum is a hands-on catalogue of the gravitational forces acting on the planets in our solar system. Created by Kristoph Krisjans, who also brought us the Moondrop gravity-defying fidget toy, the Gravity Museum serves a similar dual purpose: it teaches us about the universe through a tangible, interactive experience; and it looks damn cool on the desktop.

Since we're all familiar with the gravity on Earth, Krisjans uses the Earth sphere in his museum as the benchmark. All 8 planets are the same size and shape, but the 7 we haven't been to yet have been precisely calculated with a weight* representative of their specific gravity as it relates to Earth's. You can "experience" the different forces by holding Earth in one hand and, say, Jupiter in another. Jupiter's gravitational force is much larger than Earth's, so its weight will allow you to feel how heavy Earth would be if you held it on the surface of Jupiter.

Here's a GIF of the planet spheres in action.

If you like the Gravity Museum's tangible take on physics and the solar system, or just dig the jewel-toned spheres in their domed display case, head to Kickstarter and pledge for one of your own through December 13, 2017.

*As a quick review, remember that an object's mass does not change regardless of where it is in the solar system. But weight is a product of mass and the force of gravity acting on it, and can change based on location. It's a word we often use interchangeably with "mass" since we don't have to deal too much with different gravitational forces in everyday life.

With the Gravity Museum, Krisjans has established different masses for his planets to provide a sense of gravitational force. I'm using the word "weight" here because it's the more common term and, since you'd be using the Gravity Museum on Earth, an accurate one for our purposes.

Adios Hubble, Aloha James Webb. Houha Designs has made the makings of a miniature James Webb Space Telescope from mat board, and flat packed it into this neat model kit. Skill level for assembling the telescope is rated...

You don't even have to make sweet love or spend 10 hours straight wandering through Skyrim in this bean bag chair to reduce your anxiety. The Moon Pod, a reinvention of the iconic first apartment furniture staple, is...

Dutch designer Jolan van der Wiel not only created these Fraggle-Rock-meets-Super-Mario-Brothers-meets-Gotham-City hybrids, he also created the simple wood-framed machine used to forge them. Summoning the forces of gravity...

The Elysium Chair is the result of an equation defining posture and gravitational force. I think that's the math geek way of saying it's reeeeeeeal comfortable. So comfortable, it will simulate weightlessness when you...