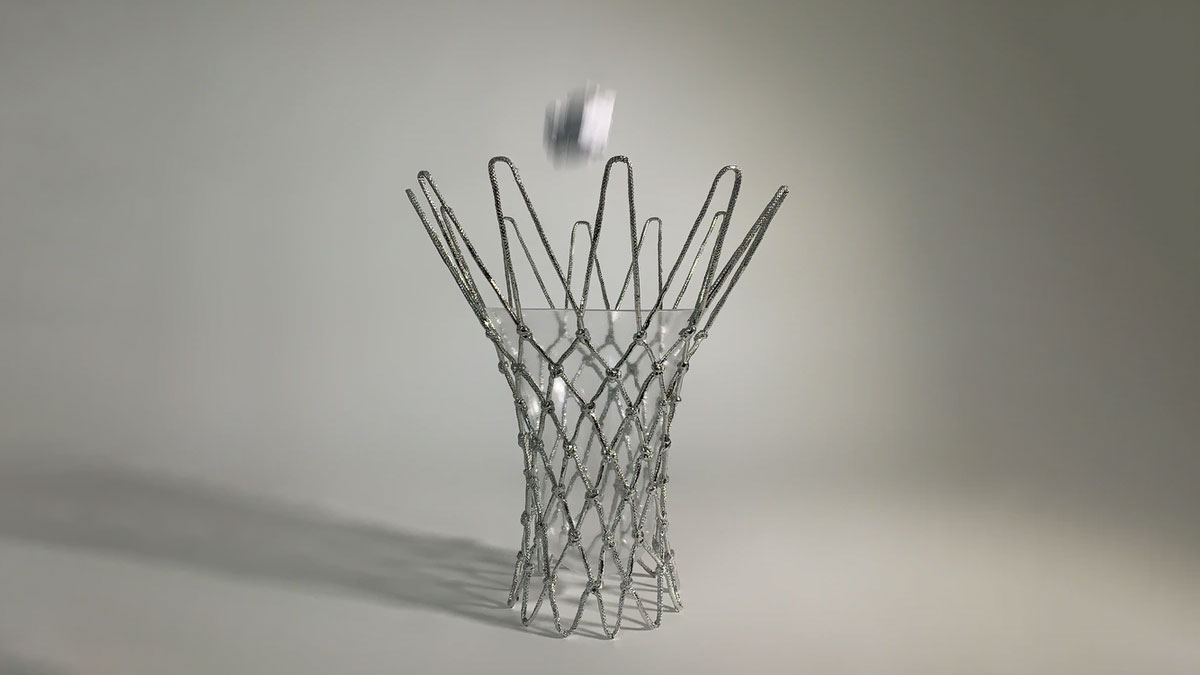 Supernet is a waste basket not just for sports fans, but anyone who's ever tried to swish the shot with a piece of trash. In other words, Supernet is a waste basket for pretty much everyone. Made of resin and fiber, Supernets are hardened and dipped from the mold of a real basketball net. The resultant hyperboloid shape is actually very trash can-friendly in function, with the addition of a clear PET insert ensuring your trash goes into, but not through this bucket.

Supernet is the brainchild of designer Harry Allen, best known for his Bank in the form of a Pig, a piggy bank that, like the basketball net waste basket, was also cast from its corresponding real thing. Supernet seeks crowdfunding on Kickstarter through February 11, 2021 Backers will have the choice of a white, silver, or gold Supernet for $140 to $180. Those up for splurging on their favorite basketball team's colors will need to sink a $500 wad through the Supernet.

A Dumpsty Dumpster is a real steel desktop-sized dumpster for you to throw all the shit you get from your boss / wife / mama in. It even comes with authentic dumpster warning sign magnets and 2 rubber lids in your choice...

"It looks like a trash can and tastes better than an Egg, so it will be the conversation piece of your next BBQ." So say the creators of the Po' Man, a grill that sets up with a set down on the ground, operates on plain...

Joseph Joseph's Titan Trash Can & Compactor is one of the coolest low-tech gadgets I've seen all year. Maybe even on the all-time list, up there with the Naomi Spring Nutcracker. Presuming it works as shown in the video...

Even if you shoot and miss, you'll score with the TOWNEW self-sealing and self-changing kitchen trash can. Well, presuming a major source of disgust and frustration in your life is tying and changing your garbage bags...

I'm adding this Lid-L-Buddy to my lifehacks no matter what kind of pandemic is going around. The touch-free trash can and dumpster opener saves you from touching grimy, smelly, germy garbage bin lids both at home and...

Where I go my trash goes. The Trasharoo Spare Tire Trash Bag is a rugged rubbish sack that slips over your vehicle's back-mounted spare tire, encouraging responsible camping and off-roading wherever you go...

Is there something perfectly cyclical about throwing your garbage away in a trash can (who calls them waste baskets? weirdos.) made to look like an actual piece of garbage? I say yes. It's the circle of trash...

Huupe time, Huupe time, Huupe, Huupe! The Huupe, a new smart and interactive indoor or outdoor basketball hoop, doesn't just bring the game to your gym or backyard, it brings the hype too. With the tech to stream on-demand...