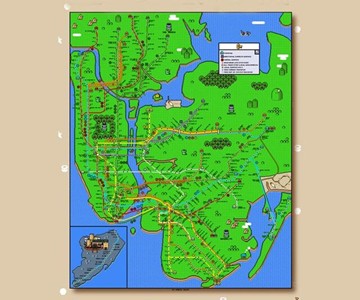 Pipes, mushrooms, a Cape Feather or two, and it's even a real, useful map of the New York City subway system. The Super Mario NYC Subway Map salutes Super Mario World in its pixel-by-pixel mass transit trek through 16-bit pastures and trees that span from the Bronx to Brooklyn. Take a turn to the southwest and stop off on Chocolate, er, Staten Island if you dare.

Artist Taste the Bacon designed the Super Mario incarnation of New York's subway exclusively for RIPT Apparel. It is available in 18" x 24" and 24" x 32" poster sizes.

Memories of the most beautiful, challenging, momentous trail you've ever traveled become a custom, 3D work of art, courtesy of Topo Trail Maps. Out of his studio in Oregon, Trevor Crosta handmakes every Topo Trail Map...