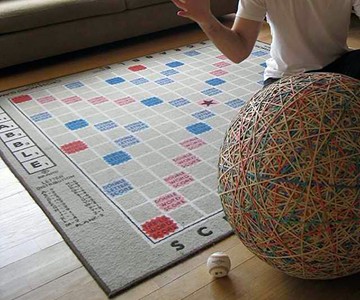 Although most of my anecdotes and personal claims to greatness are complete BS, I swear, what follows is a true story. Two true stories, actually. First, I am a formidable Scrabble player. Second, one time I dated a girl who, when I mentioned this fact to her, seemed only to humor my assertion. To me, that meant one thing: Game. On. So we're sitting at the board and I draw a B and she draws a K and I'm going first so she starts dicking around with her letters and trying to make small talk to cover the fact that she's concentrating really hard on coming up with a respectable word when...SHAZAM!...I throw down "barista". All 7 letters, double word score for going first, +50 on the bonus, equals 68 points to kick things off. I kid you not, she took one turn, pulled out the Headache card, and then suggested we watch porn instead.

Unlike Scrabble the game, SamTimer's Scrabble the rug suits both those who excel at alphabet manipulation and those who can't put their anagram skills where their mouth is, but need a clever novelty for the billiards room. The nylon floor cover measures 78" x 78".

One more thing: the contents of the above photo are making me nervous. Because it has forever been my assumption that anyone possessing a Scrabble rug would also own a gargantuan rubber band ball. The coincidence of the photographer who designed this shot feeling the same way is uncanny. I need to know this person. We're obviously soul mates.

A great way to get the kids to turn off the lights and go to bed is to give them a duvet cover and pillowcases printed with a word search. Oh, there's a washable marker included with the Word Search Bedding too, so they...

Who's up for a roll in the...moss? A shag on a shag rug woven into a lush forest floor? These Green Forest Moss Rugs from A Saturday Shop come in a handful of different sizes and shapes, all in Mother Nature-approved...